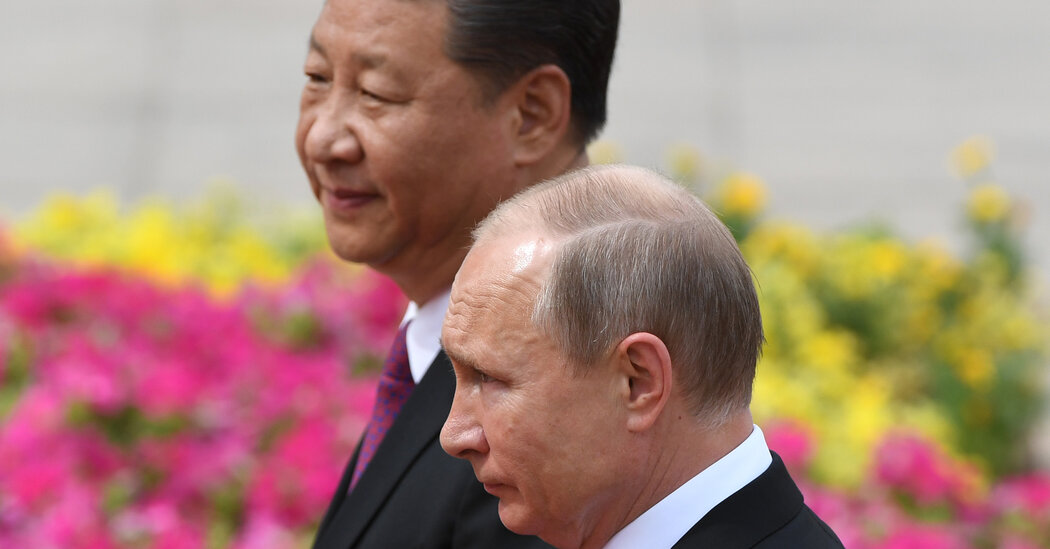 In a Chinese Communist Party newspaper, an article declared that Russians had offered definitive evidence to prove that the lurid photos of bodies in the streets of Bucha, a suburb of Ukraine’s capital, Kyiv, were a hoax.

A party television station in Shanghai said Ukraine’s government had created the grisly tableaux to win sympathy in the West. “Obviously, such evidence would not be admissible in court,” the report said.

Only a month ago, the White House warned China not to amplify Russia’s campaign to sow disinformation about the war in Ukraine. The Chinese efforts have intensified anyway, contradicting and disputing the policies of NATO capitals, even as Russia faced renewed condemnation for the killings in Bucha and other atrocities in recent days.

The result has been to create an alternate reality of the war — not just for the consumption of China’s citizens but also for a global audience.

The propaganda has challenged the Western efforts to isolate Russia diplomatically, particularly in the Middle East, Africa and Latin America, which have been fertile ground for conspiracy theories and distrust of the United States.

“Russia and China have long shared distrust and animosity toward the West,” said Bret Schafer, an analyst who tracks disinformation for the Alliance for Securing Democracy, a nonprofit group in Washington. “On Ukraine, it’s a level above that — just the extent to which they have parroted some pretty specific and in some cases pretty far-fetched claims from Russia.”

The campaign by China has further undercut the country’s effort to present itself as a neutral actor in the war, eager to promote a peaceful resolution.

In fact, its diplomats and official journalists have become combatants in the informational war to legitimize Russia’s claims and discredit international concerns about what appear to be war crimes.

Since the war began, they have parroted the Kremlin’s justifications for it, including President Vladimir V. Putin’s claim that he was fighting a neo-Nazi government in Kyiv. On Twitter alone, they have used the word “Nazi” — which Russia uses as a rallying cry — more times in the six weeks of the war so far than they did in the six months before, according to a database created by the Alliance for Securing Democracy.

In an example on Wednesday, an official with China’s Ministry of Foreign Affairs tweeted a doctored photo appearing to show Nazis holding a flag with a swastika next to flags of Ukraine and the United States. “Surprisingly, the US stands with the neo-Nazis!” the official, Li Yang, wrote of the image, which originally featured a neo-Nazi flag in place of the American flag.

The timing and subjects of many of the themes prominent in the countries’ coverage suggest coordination or at least a shared view of the world and the United States’ pre-eminent role in it. China’s attacks on the United States and the NATO alliance, for example, now closely hew to those in Russian state media blaming the West for the war.

At times, even the wording — in English for global audiences — is almost identical.

After YouTube banned RT and Sputnik, two Russian television channels, for content “minimizing or trivializing well-documented violent events,” both RT and Frontline accused the platform of hypocrisy. They did so using the same videos of former American officials, including President George W. Bush, President Barack Obama and Hillary Rodham Clinton, joking about weapons, drones and the killing of Col. Muammar el-Qaddafi, the former Libyan leader.

In another instance, the same accounts used a video of Joseph R. Biden Jr. warning in 1997, when he was a senator, that NATO’s eastward expansion could provoke a “vigorous and hostile” reaction from Russia to suggest that Mr. Putin’s decision to go to war was justified.

China’s efforts have made it clear that the White House’s warning did little to influence Beijing. China’s propagandists have instead intensified their efforts, amplifying not only the Kremlin’s broad views about the war but also some of the most blatant lies about its conduct.

“If you’re just looking at the outputs, then that message didn’t get through,” Mr. Schafer said. “If anything, we’ve seen them sort of double down.”

The White House did not respond to a request for comment about China’s support of Russian disinformation.

While the extent of any direct collusion between Russian and Chinese on war propaganda remains uncertain, the roots of cooperation in international media outreach stretch back nearly a decade.

China’s leader, Xi Jinping, pledged to deepen ties between Russian and Chinese state media on his first foreign trip in 2013 — to Moscow. Since then, the two countries’ myriad state media organs have signed dozens of pledges to share content.

Sputnik alone has reached 17 agreements with major Chinese media, which shared its articles over 2,500 times in 2021, according to Vasily V. Pushkov, the international cooperation director for Rossiya Segodnya, the state company that owns and operates Sputnik.

Russia prepares renewed offensive. Ukraine is bracing for a Russian assault along its eastern front, where Ukrainian officials have warned civilians still living in the region that time is running out to escape. But the road to safety is fraught with peril, with reports of Ukrainian civilians being killed as they try to flee.

More evidence of atrocities. Officials continued to document and expose atrocities committed by Russian forces around Kyiv, in what a growing number of Western officials claim are war crimes. Times reporters and photographers went to Bucha to uncover new details of the execution-style killings of civilians.

On the diplomatic front. Karl Nehammer, the Austrian chancellor, visited President Vladimir V. Putin, becoming the first Western leader to meet with him in person since the start of the invasion. Mr. Nehammer said he came away from the meeting fearing that Mr. Putin intended to drastically intensify the brutality of the war.

The two have taken other cues from each other as well.

In mid-March, after Russia Today began to use clips of the Fox News host Tucker Carlson to support the idea that the United States was developing bioweapons in Ukraine, Chinese state media also began to pick up Mr. Carlson’s broadcasts.

On March 26, Mr. Carlson was quoted on China’s flagship nightly news broadcast, averring that “it turns out our government has for some time funded biolabs in Ukraine.” The next day, the English-language channel, CGTN, repeated a Russian claim tying the labs to the laptops of Hunter Biden, the American president’s son.

Russian and Chinese state media have also increasingly drawn on the opinions of the same group of internet celebrities, pundits and influencers, featuring them on their shows as well as in YouTube videos. One of them, Benjamin Norton, is a journalist who claimed that a coup sponsored by the United States government took place in Ukraine in 2014 and that U.S. officials had installed the leaders of the current Ukrainian government.

He first explained the conspiracy theory on RT, although it was later picked up by Chinese state media and tweeted by accounts like Frontline. In a March interview, which China’s state broadcaster, CCTV, trumpeted as an exclusive, Mr. Norton said the United States, not Russia, was to blame for Russia’s invasion.

“Regarding the current situation in Ukraine, Benjamin said that this is not a war caused by Russia’s invasion of Ukraine, but a war planned and provoked by the United States as early as 2014,” an unnamed CCTV narrator said.

At times, China’s information campaigns have seemed to contradict the country’s official diplomatic statements, undercutting China’s efforts to play down the links between its relationship with Russia and the brutal invasion. On Wednesday, Zhao Lijian, a spokesman for China’s Ministry of Foreign Affairs, called the images from Bucha “disturbing” and asked for all parties to “exercise restraint and avoid groundless accusations.”

Only the day before, Chen Weihua, a vocal and prolific editor at China Daily, which is owned by the Chinese government, seemed to do just that. He retweeted a widely shared post that said there was not “one iota” of proof of massacre in Bucha and accused the West of “staging atrocities to jack up emotions, demonize adversaries and extend wars.”

Mr. Chen is one strand of a sprawling network of diplomats, government-controlled media, and state-backed pundits and influencers who have extended China’s domestic narrative about the conflict to overseas platforms like Twitter and Facebook. Central to their message is that the United States and NATO, not Mr. Putin, are responsible for the war.

One political cartoon, shared by state media and Chinese diplomats, portrayed the European Union as kidnapped by Uncle Sam and chained to a tank with a NATO flag. Another, from a Chinese diplomat in St. Petersburg, Russia, showed an arm with a stars-and-stripes sleeve stuffed up the back of a European Union puppet brandishing a spear.

Other images portraying the European Union as a lackey of the United States came out of a number of official Chinese accounts in the run-up to a tense meeting between Mr. Xi and the European Union, in which Europe called on China not to subvert Western sanctions or support Russia’s war.

Maria Repnikova, a professor of global communication at Georgia State University who studies China and Russia information campaigns, said the two countries had “a shared vision of resenting the West” that drove nationalistic sentiment at home. At the same time, the shared messages have resonated globally, especially outside the United States and Europe.

“It’s not coordination but echoes of the similar sort of concerns or stance when it comes to this war,” she said of views in Africa and other parts of the world. “China is also trying to showcase that it’s not isolated.”