A woman carries a dog past barriers along the near-empty Nanjing Road shopping street outside of the impacted areas during Covid a lockdown in Shanghai on March 31, 2022. 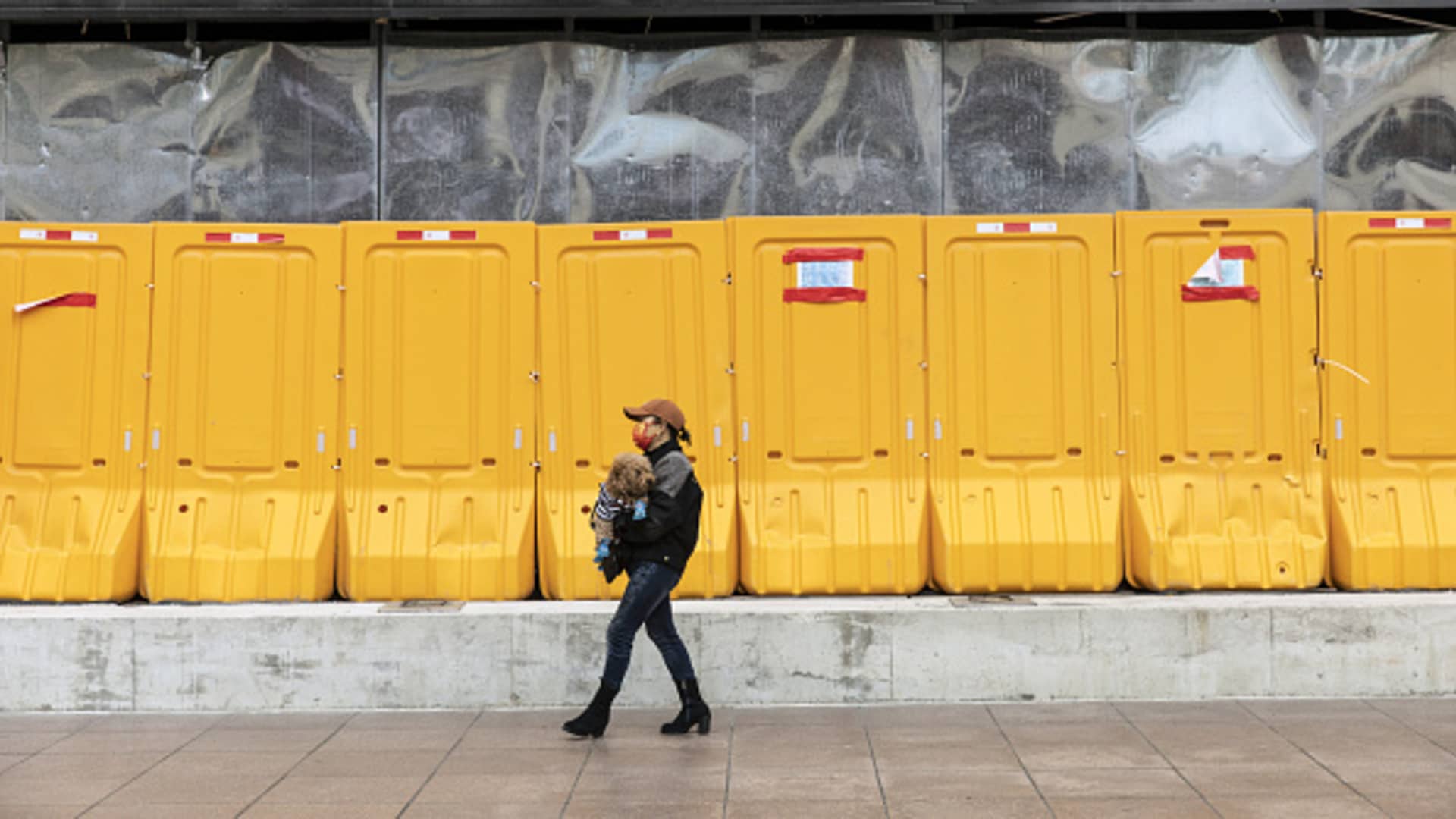 The citywide lockdown in Shanghai, the site of China’s worst coronavirus outbreak in two years, is so strict that even some dogs can’t go out. So their owners are bringing the outdoors to them.

For Anjo, a 2-year-old Pomeranian mix, that means a little patch of leaves and grass that Dani Chapman has cobbled together on her balcony while she watches the dog for a friend who’s in quarantine.

“We’ve had to come up with really creative ways to encourage the dogs to use the bathroom inside,” said Chapman, 32, an English teacher from Ireland who also volunteers with animal rescue groups.

Almost all 26 million residents in Shanghai, China’s largest city and financial center, are on lockdown in a major test of the country’s zero-tolerance pandemic strategy, which seeks to minimize cases through border closures, mass testing, contact tracing and quarantine. On Friday, the city reported a record 21,000 new cases, almost all of them asymptomatic.

The lockdown bars residents from leaving their gated compounds and sometimes even their apartments, and the government has not said whether that applies to pets as well. Chapman said the final decision rests with each compound.

Some communities have agreed to make an exception for dog walking but others refuse or leave the rules ambiguous, meaning dogs in some parts of the city have been kept inside for almost two weeks.

“It’s just all based on luck and how understanding your community committee is, which really isn’t fair to the dogs,” Chapman said.

Pet owners trying to follow the rules are doing their best to simulate the outdoors, which works better for some dogs than others. Like Chapman, Kyle Chen covered part of his balcony with leaves and grass for Kaka, his 4-year-old schnauzer. The dog wasn’t having it.

As a last resort, Chen began walking Kaka secretly when no one was around, usually early in the morning or late at night.

“I’ve exhausted all the means,” he said, adding that their surreptitious strolls had been approved by the anti-epidemic rule enforcer in his compound.

Shanghai residents confined to their homes have complained of difficulties obtaining food and medical care, concerns that pet owners say extend to animals as well. The lockdowns were originally set to last only five days, and many people were unprepared for them to be extended as testing turned up new cases. Panic buying, store closures and a shortage of delivery workers have some owners worried about what their pets will eat.

What to know about the latest COVID wave