Stocks fell for the first time in four days on Tuesday, giving back some of the strong gains from the previous session, amid sharp losses from retail and bank shares. 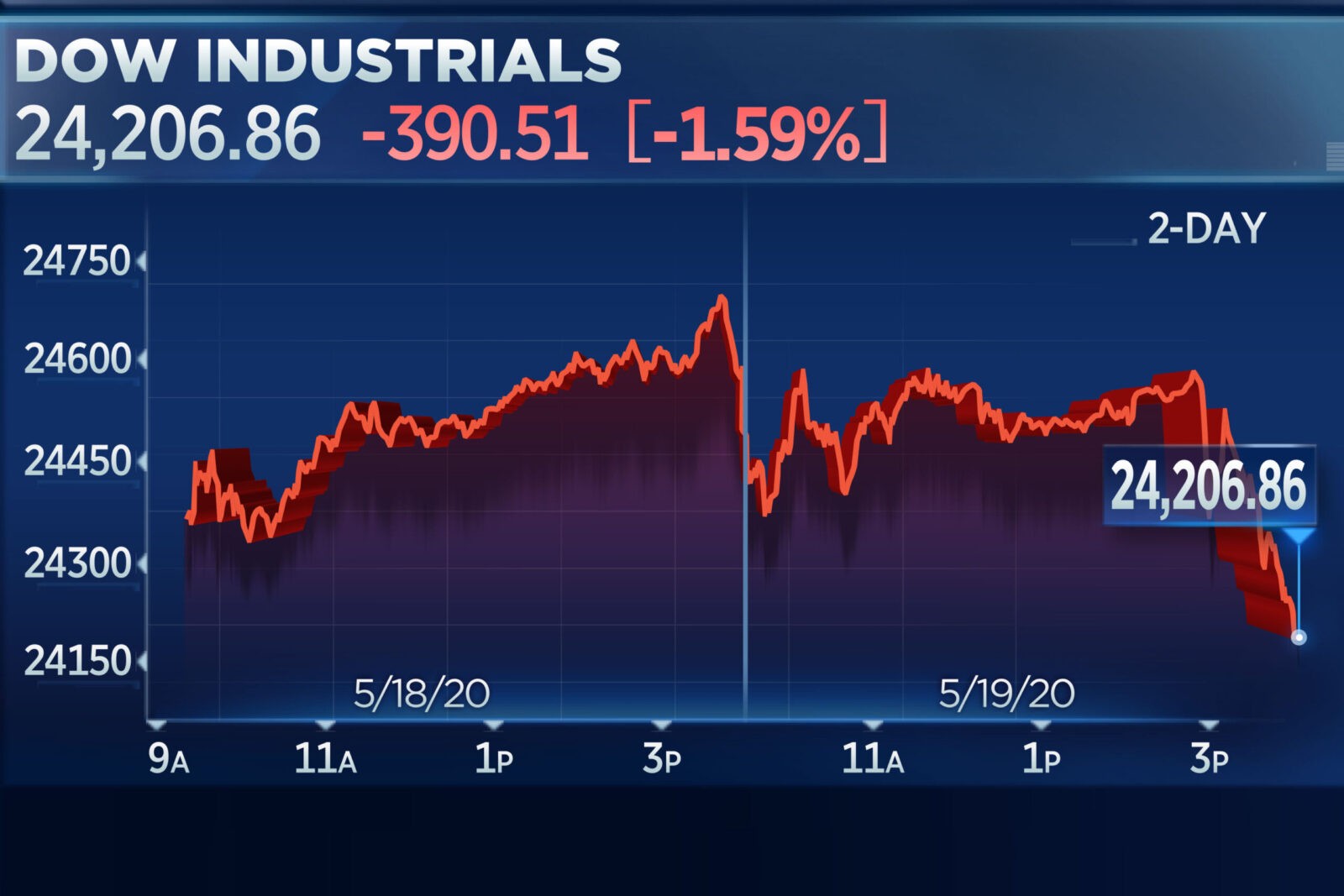 The major averages were under pressure in the final hour of trading after a STAT News report raised concerns about the trial results for a potential coronavirus vaccine from Moderna. Shares of the biotechnology company dropped 10.4%.

Home Depot shares lost 3% to lead the Dow lower after the home improvement retailer said net income last quarter dropped 10.7% due to extra costs related to the pandemic. Although the retailer also said sales increased by 7% for the period. Walmart shares were down 2.1%, giving up earlier gains, despite soaring e-commerce sales in the first quarter.

Other retailers such as Kohl’s, Macy’s and Nordstrom also closed lower.

Bank shares fell broadly on Tuesday. Wells Fargo dropped 5.8% while Bank of America and Citigroup slid more than 2.7% each. JPMorgan dropped nearly 2%. Those losses came on the back of strong gains from Monday’s session.

“Buying weakness and selling strength has proven to be the most profitable strategy to play banks up to this point,” said Frank Cappelleri, executive director at Instinet, in a note. “That certainly could change, but we won’t know if that can or will occur until the next breakout attempt happens.”

Investors turned their attention to Washington as Treasury Secretary Steven Mnuchin and Federal Reserve Chairman Jerome Powell testified before the Senate Banking Committee. Their testimony was part of required updates to Congress on the economic response to the coronavirus pandemic.

Mnuchin said the government is “fully prepared to take losses” on coronavirus business bailouts. That testimony comes after Powell told CBS’ “60 Minutes” the central bank still has plenty of ammunition to support the economy.

Despite all this, “it’s still very tough from a fundamental perspective for anyone to get incredibly bullish,” said Yousef Abbasi, director of U.S. institutional equities at INTL FCStone. “If we get more data and cities start to reopen … then I would anticipate more confidence among investors.”

Data compiled by Johns Hopkins University shows more than 4.8 million cases have been confirmed worldwide, with over 1.5 million of those infections in the U.S. alone.

Tuesday’s action followed a strong rally on Wall Street that saw the Dow and S&P 500 both enjoy their biggest one-day gains since April 6. Investors cheered news that an experimental coronavirus vaccine from Moderna showed promising early signs. The 30-stock Dow jumped more than 900 points, while the S&P 500 closed the day up 3.2%, hitting its highest level since March 6.

“With over 100 treatments and vaccines under development, a medical breakthrough, a more sophisticated test and trace model, and government support could drive more upside,” said Mark Haefele, chief investment officer at UBS Global Wealth Management. “But our downside scenario cannot be ruled out. This could be triggered by a significant second wave of virus cases breaking out.”

The S&P 500 remains more than 30% above its March 23 intraday low through Tuesday’s close.