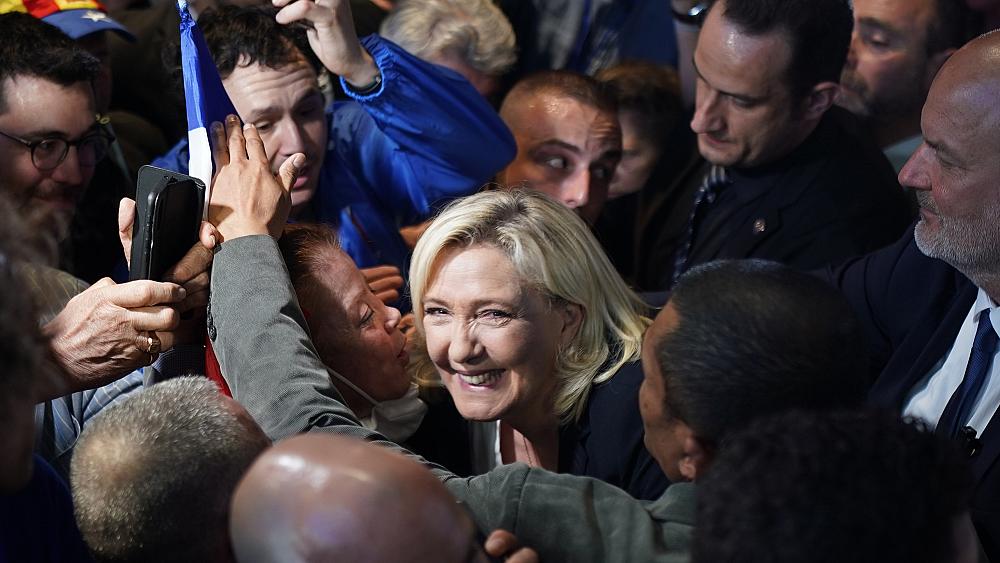 Recent opinion polls suggest the gap between the current president and his closest rival has continued to narrow — a sign that her focus on issues such as consumers’ buying power, the top concern for voters, maybe working.

“If the purchasing power issue is strangling you today it’s because previous politicians have impoverished you, have made public accounts collapse and have even put our children into debt for a long time,” Le Pen told an estimated crowd of 4,000 supporters in the southern city of Perpignan.

“If Emmanuel Macron had enriched the country, excuse me but we wouldn’t be talking about purchasing power,” she said.

Le Pen’s programme contains measures designed to soften the blow of rising prices, like slashing taxes on energy bills from 20% to 5.5%, and she promises to put €150-200 per month back in people’s pockets.

The presidential hopeful urged people not to stay at home on Sunday but to “take back control” and “go and vote”, a response to concerns that the first round vote could bring a record abstention rate.

“Never has the perspective of a real change been so close, but that depends on you,” the “Rassemblement National” (“National Rally”) candidate said.

Macron has lost five or six percentage points in recent weeks and several surveys put him only just ahead of his rival, typically on 26-27% of the vote compared to Le Pen’s 23-24%.

The president strongly criticised his rival on Thursday in a newspaper interview, accusing Le Pen of “lying to people” with “a dishonest social programme” that she would not be able to finance.

The National Rally candidate had a programme that “endangers small savers and small pensions,” he said. If re-elected, he said he would maintain a cap on gas and electricity prices which had “made it possible to prevent a 30 point increase for heating”.

But while Emmanuel Macron has been concentrating on the war in Ukraine — again he accused Vladimir Putin of “cynicism” on Thursday — he has taken late to the campaign trail.

Meanwhile, Marine Le Pen has been hammering away over domestic issues, particularly those affecting people finding it hard to make ends meet and a squeezed middle class.

However, she has not lost her nationalist streak. At Thursday’s rally, she once again highlighted immigration.

Voter aversion to Le Pen a thing of the past, say pundits

Gilles Finchelstein, director of the left-leaning think-tank the Jean-Jaurès Foundation, argues that in a second-round run-off, Emmanuel Macron will no longer be able to benefit from the “Republican front” of previous elections including in 2017, when many on the left vote tactically to keep out the far-right.

He told AFP he did not believe that this time voters are any more hostile to Le Pen than they are to the current president.

“What is worrying in what has happened in the last two to three weeks, is that there has been a reactivation of sentiment among the left-wing vote against Emmanuel Macron,” Finchelstein said.

“It’s not at all like in 2017,” political analyst Pascal Perrineau told AFP, recalling Macron’s large second-round victory over Le Pen.

“During this campaign, Marine Le Pen almost disappeared into invisible France, as she often says. She went to small villages, small towns. She spoke to this France that has been presented for several years as a France of the peripheries that feels forgotten. But these forgotten voters, they will remember past favours at the ballot box.”

Perrineau said uncertainty over Sunday’s first round was “not negligible”, with around half of French voters undecided, more than ever before.

Many in Macron’s campaign fear that his supporters may not go to polling stations because they already think he will win, while those angry at his policies will make sure to vote.

As well as Le Pen, several other candidates are looking challenge Macron’s bid for a second term.

In third position according to the polls is far-left figure Jean-Luc Mélenchon, who has increased his support but is still a distance behind Le Pen, according to polls.

Another far-right candidate, Eric Zemmour, and conservative contender Valérie Pécresse are among other key challengers.

Exhibition of pets prohibited but sales continue: ‘This cruelty must end all together’