Human Rights Watch (HRW), has released a report entitled "'Their Faces Were Covered': Greece's Use of Migrants as Police Auxiliaries in Pushbacks." 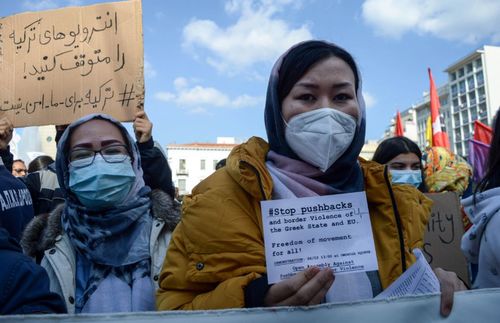 According to the report, Greece employs third country citizens who appear to be from Middle Eastern and Southeast Asian countries to push refugees back to Turkey.

Remarks of Greece’s minister of migration and asylum, Notis Mitarachi, that people coming from Ukraine were “real refugees” whereas those who were on the Turkey-Greece border were not are also included in the report.

“Pushed back without food and water”

The report is based on interviews with 26 refugees from Afghanistan, 23 of whom were pushed back to Turkey via the Evros river, which makes up the border between the two countries, between September and February.

“Twenty people interviewed by Human Rights Watch were held at detention facilities, usually for less than 24 hours or overnight, before being pushed back into the Evros River to Turkey.

“They described cramped conditions, sometimes insufficient space even to lie down, no blankets or sources of warmth, and little or no food and drinking water. They also described beatings, being stripped of their clothing — in some cases being left totally naked — and other abuses.”

Sixteen of the interviewed refugees said the boats taking them back to Turkey were piloted by men speaking Arabic or Southeast Asian languages.

“They all reported that Greece’s police were close by when they loaded the migrants onto small boats. These men often wore black or commando-like uniforms in addition to balaclavas to obscure their identities.

“All but five of the interviewees said the men ferrying the boats forced them to disembark in the middle of the Evros River, where they were then made to wade to the riverbank on the Turkish side, sometimes in chest- to chin-high water under freezing temperatures.”

“The Greek government routinely denies involvement in pushbacks, labeling such claims as ‘fake news’ or ‘Turkish propaganda’ and cracking down, including through the threat of criminal sanctions, against those reporting on such incidents.”

The European Commission must ensure that none of its funding contributes to violations, said HRW.