How summer could determine the pandemic’s future

What’s certain is the coming few months will say a lot about the state of the country, the public’s psyche and how much death and illness it’s willing to accept. 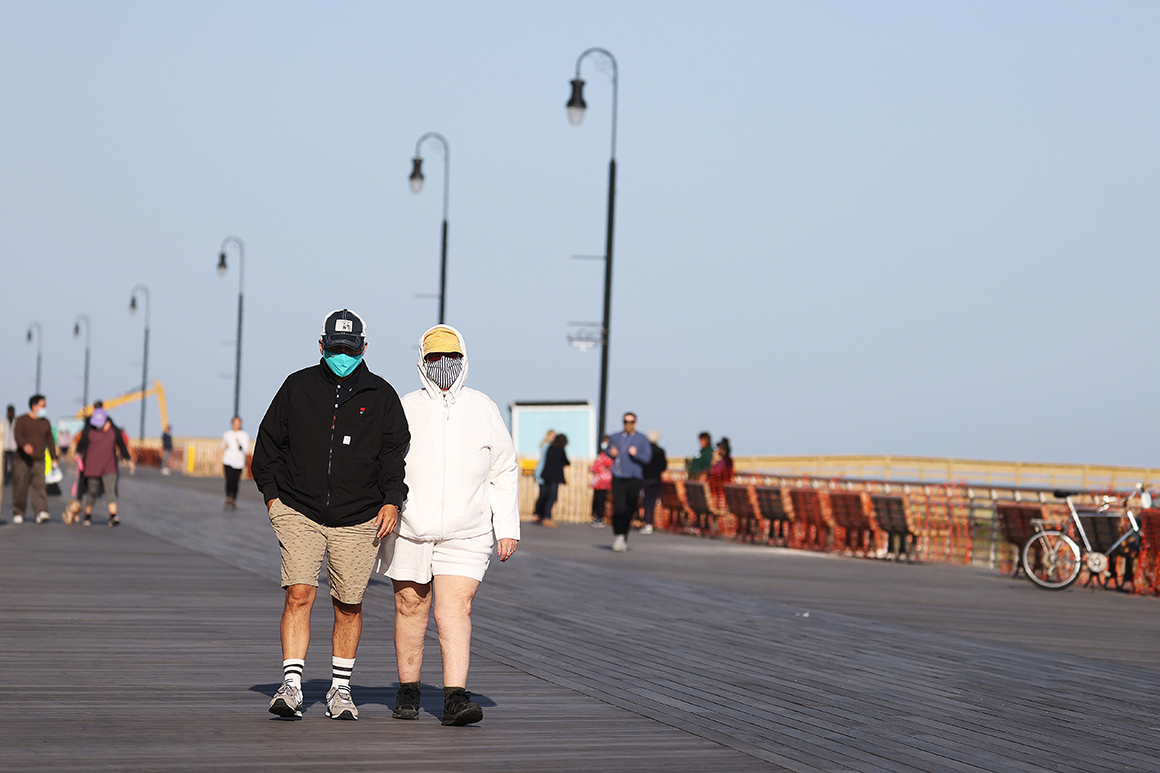 With so much confusing data and contradictory political messaging on the reopening before the November elections, there is a road map to follow this summer to know if the fall will be a time of true recovery or deepening despair.

Here are five story lines this summer that will reveal whether the U.S. has turned the corner:

The country’s underfunded public health system is still building up tools to make sure new infections don’t blow up into the next hot spot. If we’re lucky, the virus won’t exploit those holes — and if we’re not, case numbers could begin climbing again within weeks.

The United States is now running about 400,000 tests a day, roughly double the number from three weeks ago, according to the COVID Tracking Project. But that’s still far short of the 30 million per week that some experts say is needed to quickly detect new hot spots and contain disease spread.

A shortage of basic supplies like cotton swabs that plagued early efforts to ramp up testing remains a problem, said Michael Mina, an assistant professor of epidemiology at the Harvard T.H. Chan School of Public Health. “We do not have enough to go forward, despite what the president says,” Mina said. “Anyone who says we have plenty of tests in this country is just wrong.”

CDC Director Robert Redfield said in an interview the U.S. public health system has been historically underfunded and that it will be left to private testing labs like Quest and LabCorp to continue scaling up capacity.

But even if they pick up the slack, contact tracing programs that identify people an infected person came into contact with are still a work in progress, even as governors move to reopen their economies and tell residents that restaurants and retail establishments are safe to visit.

Redfield wants a workforce of between 30,000 and 100,000 contact tracers. But Texas is only halfway toward Gov. Greg Abbott’s goal of hiring 4,000. And in Colorado — one of the first states to reopen — the Association of Local Public Health Officials estimates that public health departments still need to hire as many as 5,000.

There are other obstacles: Massachusetts at first found people weren’t naturally inclined to take calls from public health workers instructing them to self-quarantine. And governors in Ohio and Washington state have to contend with a rash of conspiracy theories that link contact tracing to government plots to control Americans.

The problems could continue if states lose the support tens of thousands of federally-funded National Guard troops who have been doing testing, contact tracing, as well as delivering food to people in quarantine and decontaminating nursing homes. The deployment is currently slated to end on June 24, though the Trump administration may yield to congressional lobbying for an extension.

Businesses will have to show their virus savvy

Businesses are quickly transforming to reassure nervous customers and employees about making a safe return. But they’re operating with little federal guidance and confronting new ethical dilemmas about how far they can go to reduce infection risks.

Some are switching to services like Venmo so that customers don’t need to rely on cash, said Ashli Watts, president of the Kentucky Chamber of Commerce. Auto manufacturing plants are requiring daily temperature checks and completion of symptom questionnaires before employees are allowed inside.

And some firms are increasingly looking at antibody tests and “immunity passports” to know who has been exposed to the virus. These tools could help employers reconfigure workplaces or make staffing decisions. But ethics experts warn there’s the potential for abuse with unproven technology and a lack of government guidelines on how to protect privacy or avoid discrimination of individuals or disadvantaged groups.

In the short run, public-facing businesses this summer expect customers to vote with their feet and shun those places that don’t appear to be taking adequate precautions.

“People are dipping their toes back in the water and talking to friends about their experience,” said Glenn Hamer, president of the Arizona Chamber of Commerce. “A lot of it is word of mouth right now, as opposed to broad advertisements saying, ‘we’re open, we’re safe.”

Consumer demand: You can reopen, but will people show up?

Growing numbers of Americans are ready to venture back out into an economy that’s been battered by two months of shutdowns, but most aren’t expecting a return to normalcy anytime soon. That means businesses and local governments will have to temper their expectations as the public figures out its new comfort zone.

“Governors and mayors can declare their state or city open for business all they want, but ultimately the consumer decides.”

Watts said that restaurants in Kentucky that can only operate at below 33 percent capacity are booked solid.

“There’s a global case of ants in your pants,” Hamer said, which might explain why parks and beaches on both coasts have been packed.

Still, many people across the country remain unwilling to go out even when they’re legally allowed, and encouraged by the president to do so. Almost three out of four respondents to one poll said they plan to avoid sporting events until there is a vaccine is developed for Covid-19.

“Governors and mayors can declare their state or city open for business all they want, but ultimately the consumer decides,” said Joseph Allen, a professor at the Harvard T.H. Chan School of Public Health. “And they’re going to make the decision based on their read of the news, the science, and their personal risk. So there’s certainly a tension there.”

In Georgia, which reopened its economy three weeks ago, business at bowling alleys and barbershops hasn’t returned to pre-pandemic levels but it is slowly picking up.

Leading public health officials caution against a false sense of security, noting that case counts are falling in part because of the very social distancing measures that some governors now say are no longer necessary.

“There are mixed messages about the risk,” said Theresa Anselmo, executive director of the Colorado Association of of Local Public Health Officials. “People are saying we need to get the economy started and people need to go back to work — implying that there isn’t as much risk as before. But there is just as much risk, if not more.”

How will Trump message the crisis?

Even as roughly 20,000 new infections are reported each day, Trump has repeatedly urged faster reopenings, believing his reelection chances depend on a rapid economic recovery. He’s called for schools to reopen against the advice of his top health officials and urged citizens to be “warriors” in returning to work. But that posture could be harder to maintain if the virus rebounds.

While the president has lauded contact tracing in broad terms, he and many top administration officials haven’t explained where it fits into the broad response or encouraged Americans to participate.

Harvard’s Allen laid out the kind of messaging that would make a difference coming from the commander in chief: “If everyone abides by these things and does their best for the next coming months, we will ramp up our scientific endeavors and the whole country will mobilize and get through this together — everyone has their part to play,” he said.