In a video shared on social media early Tuesday, a Minneapolis police officer pins his knee against the neck of a black man who appears to be struggling to breathe on the ground. 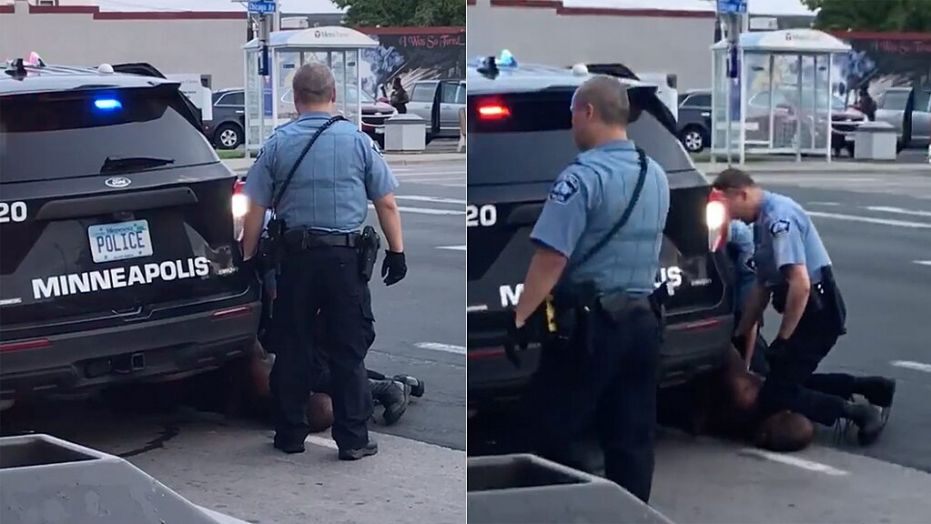 The Minneapolis Police Department announced early Tuesday that the unnamed man, who is believed to be in his 40s, later died of a “medical incident” after police responded to a report of a forgery in progress on Monday.

Now, the FBI and state authorities are investigating his death as advocates and city officials call for a quick response.

“Being black in America should not be a death sentence,”

Minneapolis Mayor Jacob Frey said during a news conference Tuesday. “For five minutes, we watched as a white officer pressed his knee to the neck of a black man. For five minutes. When you hear someone calling for help, you are supposed to help. This officer failed in the most basic human sense.”

The incident began when two officers arrived at the 3700 block of Chicago Avenue South around 8 p.m. Monday, police said. Officers located the man, whom they believed to be under the influence, inside his car. After he got out, police said, the man “physically resisted officers.”

“Officers were able to get the suspect into handcuffs and realized that the suspect was suffering a medical distress,” a Minneapolis police spokesman said in a news briefing early Tuesday. “Officers called for an ambulance. He was transported to Hennepin County Medical Center where he died a short time later.”

Police said that no weapons were used at any time by the man or the officers during the encounter.

Darnella Frazier was on her way to see friends when she saw the incident unfolding outside of a Cup Foods grocery store on the south side of Minneapolis. She quickly began recording the encounter in a 10-minute video later shared to Facebook.

“When I walked up, he was already on the ground,” Frazier said in a Facebook video. “The cops, they was pinning him down by his neck and he was crying. They wasn’t trying to take him serious.”

As more people gathered around the encounter outside the grocery store, the man pleaded that his whole body was in pain. Frazier recalled that the man’s face was being pressed so hard against the ground that his nose was bleeding.

Witnesses begged the white officer to take his knee off the man’s neck.

“You’re going to just sit there with your knee on his neck?” one bystander said on the video. Minutes later, the man appeared to be motionless on the ground, his eyes closed and head laying against the road. “Bro, he’s not even f—— moving!” one bystander pleaded to police. “Get off of his neck!”

Another asked, “Did you kill him?”

Later, the unconscious man was loaded onto a stretcher and into an ambulance. Bystanders who remained in front of Cup Foods pointed at the two officers and said the incident would haunt them “for the rest of your life.”

“The police killed him, bro, right in front of everybody,” Frazier said on Facebook. “He was crying, telling them like, ‘I can’t breathe,’ and everything. They killed this man.”

During Tuesday’s news conference with the mayor, Minneapolis Police Chief Medaria Arradondo said he had decided to ask the FBI to investigate after receiving “additional information” on the incident from a community source that “just provided more context than the information I had preliminary.” He declined to elaborate further.

The officers involved, who have not been publicly identified, were placed on paid administrative leave, the police chief said. The case will be separately investigated by the state Bureau of Criminal Apprehension, which according to the Minneapolis Star Tribune investigates most in-custody deaths.

The agency said in a statement Tuesday that it would present its findings to the county prosecutor’s office for review.

As it continued circulating, the video drew swift outrage and condemnation. In neighboring St. Paul, Mayor Melvin Carter said it was “one of the most vile and heartbreaking images I’ve ever seen,” adding, “This must stop now.”

Sen. Amy Klobuchar (D) described the incident as “yet another horrifying and gutwrenching instance of an African American man dying.” She called for “immediate action,” including a thorough outside investigation and accountability for those involved.

A protest was being planned for Tuesday afternoon at the intersection where the encounter unfolded, the Star Tribune reported. The mayor urged demonstrators to practice social distancing due to the coronavirus pandemic, but said he understood the desire to protest.

“If you’re sad, I get it,” Frey said. “If you’re angry, that makes complete sense. If you feel the need to protest, of course we want to make sure that people are able to express themselves.”

How summer could determine the pandemic’s future