Satellite imagery shows that about 200 homes and other buildings were destroyed by fire on May 16, 2020, in Myanmar’s embattled Rakhine State, Human Rights Watch said today. 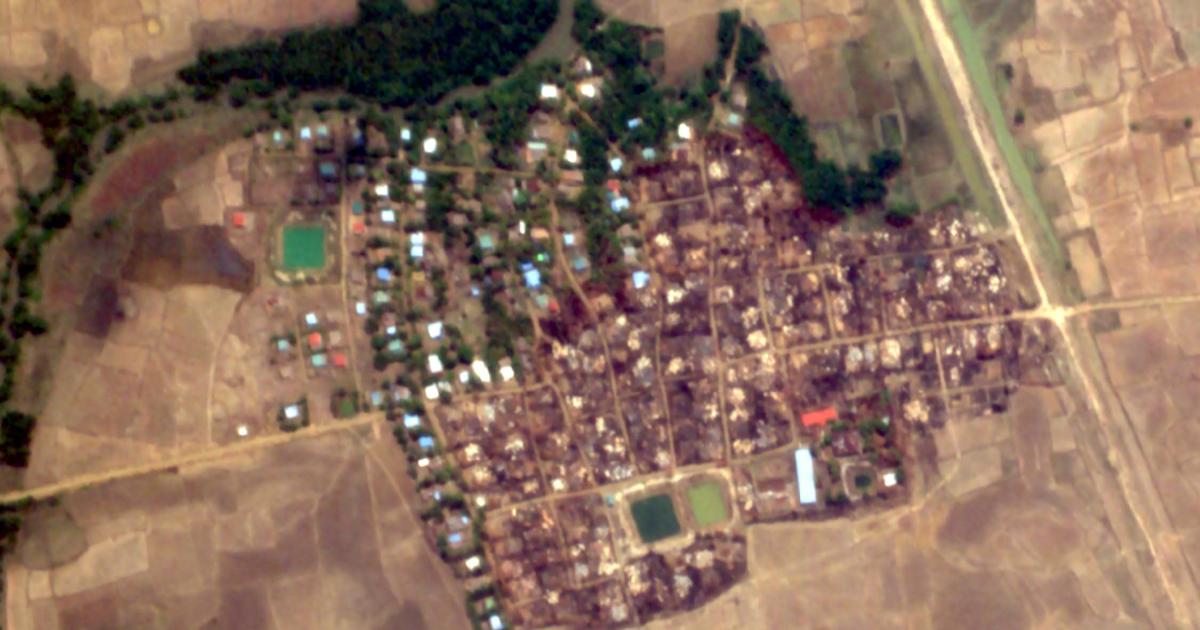 An impartial investigation is urgently needed to determine responsibility for this mass destruction of residential property in the predominantly ethnic Rakhine village of Let Kar, Mrauk-U township.

Since January 2019, fighting between the Myanmar military and the ethnic Rakhine Arakan Army has resulted in numerous civilian casualties and destruction of civilian property. The imagery of Let Kar bears a close resemblance to patterns of fires and widespread arson attacks by the Myanmar military on ethnic Rohingya villages in Rakhine State in 2012, 2016, and 2017, Human Rights Watch said.

“The burning of Let Kar village has all the hallmarks of Myanmar military arson on Rohingya villages in recent years,” said Phil Robertson, deputy Asia director. “A credible and impartial investigation is urgently needed to find out what happened, punish those responsible, and provide compensation to villagers harmed.”

Satellite imagery recorded on May 16, 2020 at 10:30 a.m. shows no signs of damage in Let Kar. But at 2:12 p.m., an environmental satellite detected extensive fires burning there. The Human Rights Watch damage analysis of 200 buildings burned is most likely an underestimate as internal damage to buildings is not visible.

The satellite imagery is consistent with witness accounts regarding the date and time of the fires and the number of buildings affected. Residents in the neighboring village of Bu Ywat Ma Nyo told the media they saw Myanmar soldiers walk past their village to enter Let Kar around 2 p.m. on May 16 and leave around 5 p.m. The two villages are nearly one kilometer apart. After the soldiers entered Let Kar, Bu Ywat Ma Nyo residents reported hearing gunfire, saw flames and smoke, and observed two aerial drones, one flying above Let Kar and another flying over Bu Ywat Ma Nyo village.

An aid worker from the town of Mrauk-U told Human Rights Watch that at about 2 p.m. on May 16, columns of smoke could be seen coming from the direction of Let Kar, 11 kilometers north. “There was no one living there after the fighting last year as [the residents] had fled, but the older people really have nowhere to go now,” he said. “They had been sheltering in IDP [internally displaced persons] camps in Tein Myo and Bu Ywat Ma Nyo villages and had at least been able to go home and collect their belongings or check their homes from time to time. Now they don’t have anything – it’s very sad.”

A former Let Kar resident who still lives nearby told a local source that he went to view the damage himself on May 17. He said he and his companions encountered about 50 Myanmar troops on the road as they travelled from Mrauk-U to Let Kar by motorbike, but the soldiers did not stop them. He said he counted at least 194 buildings that had been burned down, including his own home, and a school.

A Rakhine State regional member of parliament, Tun Thar Sein, confirmed that a military contingent had been in the area. “We will urge the union government for compensation and aid to be provided to the residents of Let Kar,” he said.

On May 17, Myanmar’s military released a statement that its troops had entered Let Kar the previous afternoon while patrolling the area and were attacked by the Arakan Army. It also issued an aerial view image of burning buildings in Let Kar, presumably taken by a drone. The military accused the Arakan Army of setting the fires and damaging at least 20 houses before retreating into the mountains.

On May 19, the Arakan Army issued a statement denying the allegations. A spokesperson, Khine Thuka, urged the media to investigate.

Most residents abandoned Let Kar more than a year ago, when fighting intensified. On April 10, 2019, the military raided Let Kar and detained 27 men for questioning about alleged ties to the Arakan Army. By April 22, three of the men had died in custody, attributed to “heart failure” by the military-owned Myawaddy newspaper. No autopsies were performed because the security forces swiftly cremated the bodies. The authorities contested allegations that the men were tortured but refused to investigate the deaths. The 24 others, two of whom are minors, remain detained in Sittwe.

On March 22, fighting resulted in more than 500 homes being burned in Tin Ma village, Kyauktaw township. The military denied responsibility. The Rakhine State government in April provided US$62,000 in compensation to residents, according to Development Media Group.

Under the laws of war applicable to the armed conflict between the Myanmar military and the Arakan Army, attacks on civilians and civilian objects, such as homes, are prohibited. The wanton destruction of civilian property is a war crime. Myanmar has an obligation to investigate alleged war crimes and appropriately prosecute those responsible regardless of rank. The Myanmar government is obligated to provide compensation for any wrongful acts and should consider ex gratia or “condolence” payments for other civilian harm.

Twitter CEO Responds to Trump: “We’ll Continue to Point Out Incorrect or Disputed Information About Elections”