NASCAR's second race back from a two-month hiatus caused by the COVID-19 pandemic saw plenty of action but had an anticlimactic finish, with Denny Hamlin getting the victory at the Toyota 500 at Darlington Raceway on Wednesday after the race was called because of rain. 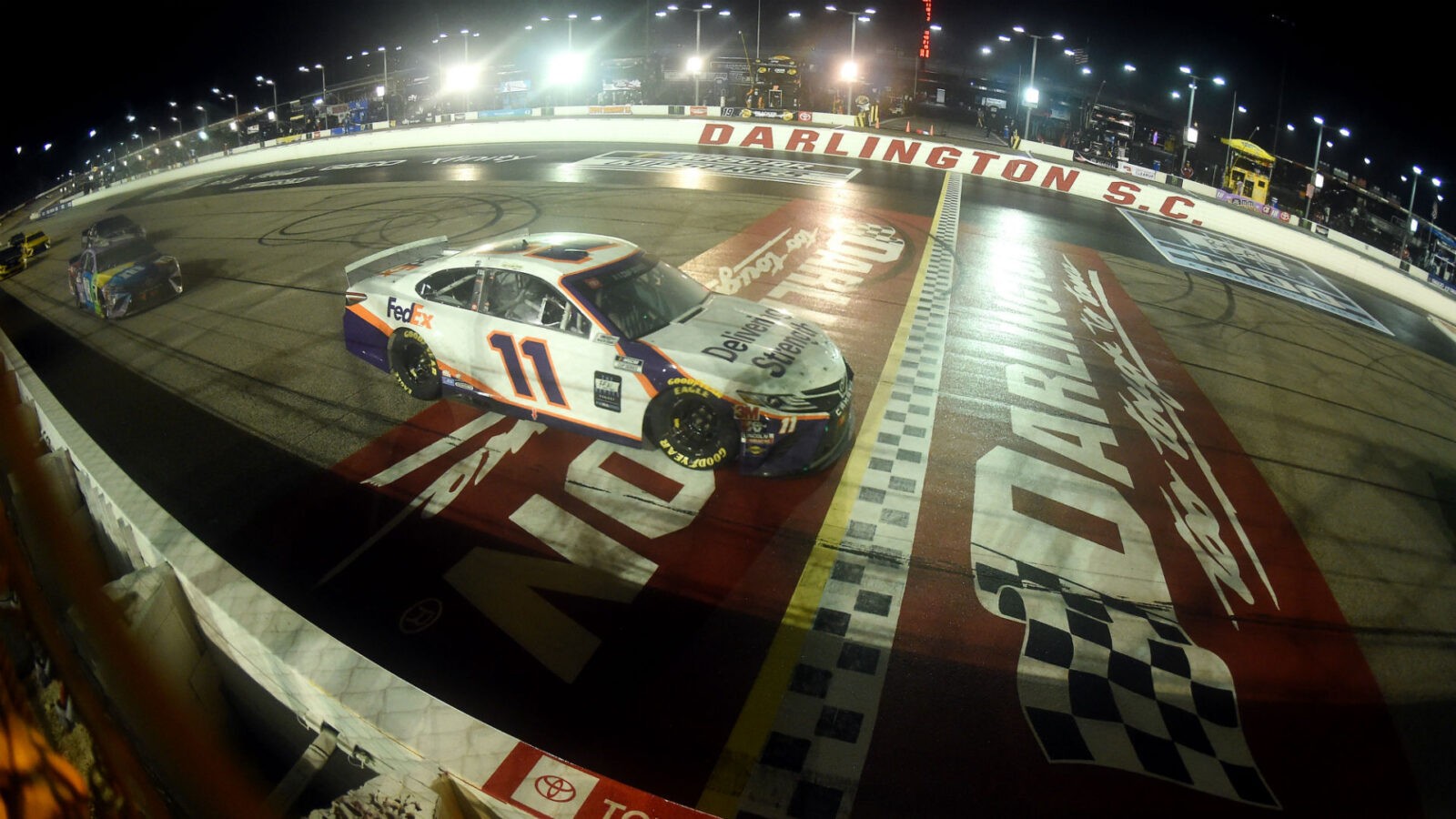 The most dramatic part of the race came with less than 30 laps to go. Kyle Busch, sitting in second, tried to make a move past Hamlin on the inside, but couldn’t complete the pass. Chase Elliott then passed Busch on the outside, and with Kevin Harvick closing down the space, Busch tried to cut him off but instead clipped Elliott and spun him out, ending Elliott’s hunt for a win.

That wreck freed up Hamlin, his teammate, to seal the win as the race was called with 20 laps to go. Busch, who had some damage on his fender from wrecking Elliott, finished second. Elliott, who delivered a one-finger salute to Busch on the track following the wreck, finished 38th.

“I’ve got my happy face on, made sure I brought it with me today,” Hamlin said from inside his car on pit road, referring to a face mask depicting a huge smile. “The pit crew did a great job today, everybody really. I was pretty happy with how it all turned out.

“It’s a driver’s race track,” said the three-time Darlington winner. “You can move around and you can do different things to make your car handle and we got it right today.”

While Hamlin got the win, Clint Bowyer was probably the most dominant racer of the night. He won the first two stages but fell out of the lead pack with 33 laps to go after losing his right rear tire due to damage caused by brushing up against the wall. He finished 22nd.

Kevin Harvick, the winner of Sunday’s Real Heroes 400 at Darlington, had another impressive run on the track that’s too tough to tame with a third-place finish. Brad Keselowski and Erik Jones finished fourth and fifth, respectively.

Sporting News tracked live updates and lap-by-lap highlights for Wednesday’s NASCAR race at Darlington Raceway. Follow along below for results from the Toyota 500. (Material from the NASCAR Wire Service was used in this report.)

10:37 p.m.  —  Rain is coming down now with 24 laps to go, they might not be able to finish if it keeps up. Denny Hamlin is in front, Kyle Busch in second, Kevin Harvick in third.

10:31 p.m. —  Green flag comes back out with 30 laps to go, but doesn’t last long as Kyle Busch turns Chase Elliott and forces a caution. Elliott isn’t too happy about that one.

10:24 p.m. — Caution out for Clint Bowyer after he loses his rear right tire due to damage from hitting the wall a couple laps earlier. Only 33 to go.

10:21 p.m. — Chase Elliott gets the jump on the restart and leads with 40 laps to go. Brad Keselowski, Denny Hamlin, Clint Bowyer and Kyle Busch round out the top five.

10:09 p.m. —  After the longest run of the night there’s another caution as Matt Kenseth loses control with 49 laps to go. Four cars on the lead lap: Brad Keselowski, Brennan Poole, Chase Elliott and Denny Hamlin

9:58 p.m. —  Chase Elliott passes Erik Jones for the lead with 69 laps left after a bump into the wall has Jones’ car driving tight.

9:47 p.m. —  Erik Jones has taken a sizeable lead after an impressive run off the restart. Chase Elliott in second, Kevin Harvick in third and Clint Bowyer and Ryan Newman battling for fourth with 89 laps to go.

9:30 p.m. — The race is official now after hitting the halfway point of 114 laps. Clint Bowyer has retaken the lead, Chase Elliott in second, Martin Truex Jr. in third.

9:12 p.m. — Martin Truex Jr. takes the lead off the restart. After 90 laps, it’s him, Kevin Harvick and William Byron up front.

8:56 p.m. —  Welp, there’s a caution now as Chris Buescher goes into the wall around turn two. Looks like he got a bump from Michael McDowell.

8:27 p.m.  —  We’re half way through Stage 1 on the restart; Bubba Wallace takes the early lead but Clint Bowyer is able to get out in front. Blaney moves up to second, Logano up to third, Bowman up to fourth and Wallace back in fifth.

8:18 p.m.  —  After 20 laps, Joey Logano has the lead. Clint Bowyer, Ryan Blaney, Aric Almirola and Ryan Newman round out the top five.

8:11 p.m.  —  Oh no. Another caution, and again it’s John Hunter Nemechek. Seems like the fender damage on his car is messing up his tires. Not the best 12 laps of his life, for sure.

8:09 p.m.  —  Ty Dillon takes the outside to get out front on the restart, Joey Logano and Ryan Blaney behind him.

8:03 p.m. —  We made it about three laps without a crash, but John Hunter Nemechek spins out and the yellow flag is up.

NASCAR is preparing to move the cars to pit road. They’ll do so on the Turn 1 side of pit road. Air Titans says they need to make a couple of more passes by pit exit before they do.

Once the start gridding cars on pit road, Titans and dryers will work on pit entry.

6:11 p.m. —  The race has been delayed, but it’s looking like they’re going to be able to get started shortly.

5:38 p.m. — It’s been raining on and off in Darlington, but there’s hope that things might clear up soon.

The original start time for Wednesday’s race at Darlington was 7:30 p.m. ET, but NASCAR officials moved it up to 6 p.m. due to the threat of inclement weather. The race was moved to after 8 p.m. because of rain.

Here is the complete starting lineup: