I’ve opened more packs of baseball cards in the past six months than I did in the previous two decades, almost exclusively from boxes that skew heavily toward nostalgia over value, and I’ve done my best to put those cards in storage boxes as I’ve taken them out of the packs. I’ve only put the very best ones — again, nothing of REAL value — into top loaders or hinged plastic boxes, because I want most of the good cards to be in those storage boxes when I look through everything again 10 years from now. 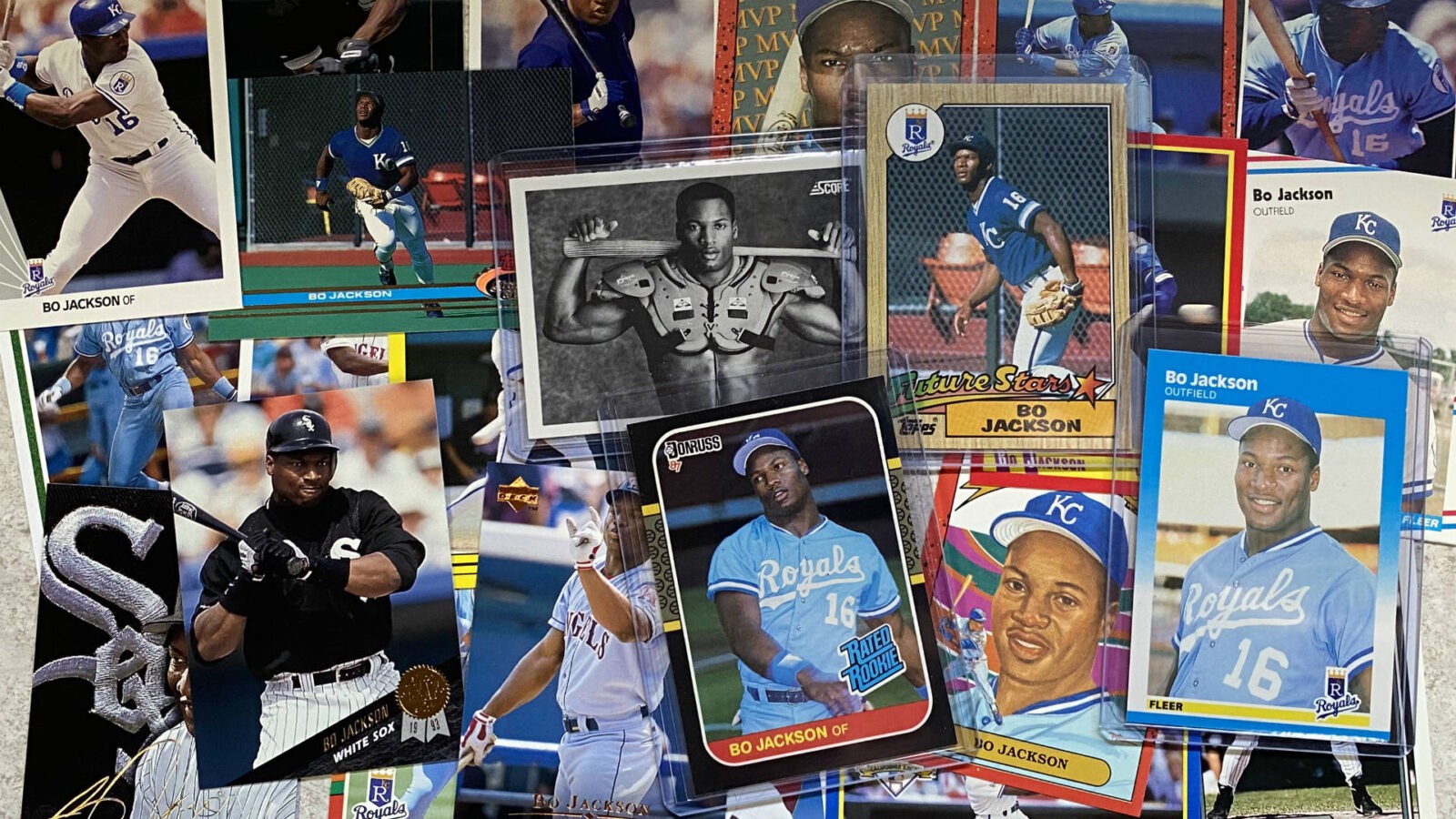 I make three exceptions: Every Ken Griffey Jr., Frank Thomas and Bo Jackson gets pulled out and stored separately. Griffey and Thomas were just amazing baseball players with Hall of Fame careers, and personal favorites. Jackson, meanwhile, had a career bWAR of 8.3 — a number Griffey topped in three individual seasons.

MORE: Ranking the 13 best sets of the Junk Wax era of baseball cards

But to the kids who grew up in my era, Bo Jackson was special. His cards were special. His cards had more value to us than to the folks at card shops or memorabilia shows. And that’s why, even now, there’s a little jolt of excitement every time a Bo bicep pops out of a pack and says hello.

So, just for the heck of it, I thought I’d rank the best Bo Jackson baseball cards.

Here are the ground rules:

Rule 1: I’m only including cards made while Bo was actually playing. No special Bo cards from current-day Topps or Donruss or whatever. They’re cool — my editor at Sporting News (Jason Foster) got one of Bo’s reprint 1986 Topps Traded cards with the rookie medallion embedded in a pack of 2020 Topps and it was great — but that’s not on this list. The only retrospect on this list is me thinking back to how awesome his cards from 1987 to 1995 were.

Rule 2: Speaking of the 1986 Topps Traded, that original card doesn’t count for this list, either. I’m only including cards you could bust open in a pack back in the day, not cards that were part of special sets. So no 1986 Topps Traded or 1986 Donruss The Rookies (though both are stellar cards), and it also means the awesome 1987 Classic board game card — Bo in an Auburn football uniform holding a baseball bat — is out. If you’ve followed me on Twitter for any amount of time, you know how much I enjoy the thrill of opening packs.

Rule 3: No Bo cards from football sets. Why? Because it’s my list, and I don’t care about football cards.

Why it’s here: It’s Bo in an Angels uniform. He didn’t actually play in 1995 — he retired that spring, at 32 years old, rather than waiting out the strike that had already canceled the 1994 World Series and showed no signs of ending soon — but he could still play the game. Bo had a career-best .344 on-base percentage in 1994, with 13 homers and 43 RBIs in 75 games. And I like to think, in the picture on this card, that Bo is saying, “I was THIS CLOSE to being the best player in baseball before that damn football injury.”

Why it’s here: I honestly couldn’t tell you exactly why I love this card, but it’s probably my favorite one in an otherwise blah 1988 Topps set. Maybe it’s because he’s standing straight up after a swing that, judging by where he’s looking, probably resulted in a line drive into the stands down the right-field line, and because he looks tall, strong and athletic in a moment where lots of baseball players don’t look tall, strong or athletic.

Why it’s here: Because it’s a Bo Jackson rookie card. I’m a fan of the 1987 Fleer set design, and the blue borders matched especially well with Bo in his Royals blue. But the standard “smile for the camera” pose for Bo Jackson, like he was any other no-name rookie in spring training? Feels like a waste — especially side by side with his other 1987 cards — even if he is flashing a great smile.

Why it’s here: This card, from the high-number series packs, is one of the first baseball cards with Bo in a White Sox uniform (he was still with the Royals when the base set was released). The Royals released him in spring training, fearing the hip injury he’d suffered in football was the end of his baseball career. Bo disagreed. The ChiSox signed him a couple of weeks later, and he did make it back on the field late in the year, but complications and surgery resulting from the hip injury cost him all of 1992.

Why it’s here: I honestly didn’t know it was possible to break a baseball bat over your knee until Bo did it. I’d never even considered the possibility. What a great image for a baseball card. On the other hand, I didn’t love the giant “Bo Breaker” font choice running down the left side of the card. Why make words roughly the same size as a picture of Bo snapping a baseball bat like it was kindling at a campfire? Ugh. That knocks this card down several notches.

Why it’s here: The best part about this card isn’t necessarily the picture, which is great, but imagining what probably happened next. It’s spring training, and Bo is tracking a fly ball in the Florida sun — the Royals played in Davenport, Fla., before moving to Arizona in 2003 — like he’s about to catch the ball then unleash a laser and throw out some poor, foolish, overeager rookie wannabe trying to impress the coaches by tagging up and scoring on a medium-depth fly ball. Just stay at third base, kid.

Why it’s here: In an otherwise awful 1991 Fleer set, the Pro-Vision subset was a stunningly beautiful change of pace. And Bo’s card — the drawing revealing he was actually a robot made to be the perfect baseball player — captured exactly what lots of us saw every time we watched such an incredible athlete on the baseball diamond.

Why it’s here: My God, the intensity. The muscles. The look that says, “Aargh, I just missed pulverizing that baseball. WHY did I just miss that pitch? I am going to pulverize the next pitch I see.” Just a great, great photograph.

Why it’s here: You cannot think of Donruss baseball cards without thinking about that Rated Rookie logo, and if there’s any rookie who ever deserved to be rated, it’s the two-sport star who played professional baseball after he won the Heisman Trophy as a college football player. The blue on the logo didn’t quite match the blue on his Royals jersey, but it was close enough. In a 1987 Rated Rookie group that included Greg Maddux, Mark McGwire, Devon White, Rafael Palmeiro and Benito Santiago, the Bo card stands above them all (to me, at least).

Why it’s here: I bought a box of 1990 Score last summer, hoping against hope that I might find this card in one of the packs. And I found TWO, the first one in a pack opened by my 1-year-old daughter (well, with my help because those Score packs were tricky). The rush, the thrill and the excitement were the very same as when I found a Bo or two in 1990, when these cards were selling for upwards of $20 at card shops and shows around the country. It’s far too easy to throw around the word “iconic” when you’re talking about Bo Jackson — I’ve typed then deleted it half-dozen times writing this article — but if you were around during peak Bo, you know this is the iconic Bo Jackson card. Why is it not No. 1, you ask?

Why it’s here: I ranked the best sets of the Junk Wax era, and the beautiful wood-grain border 1987 Topps was my easy choice for the No. 1 spot. And this is my favorite card from that set. It’s basically the perfect baseball card: A transcendent rookie star, an action shot, a classic Topps design/nameplate and that beautiful “Future Stars” logo with the star swooshing across the bottom of the card. It’s a damn work of art.