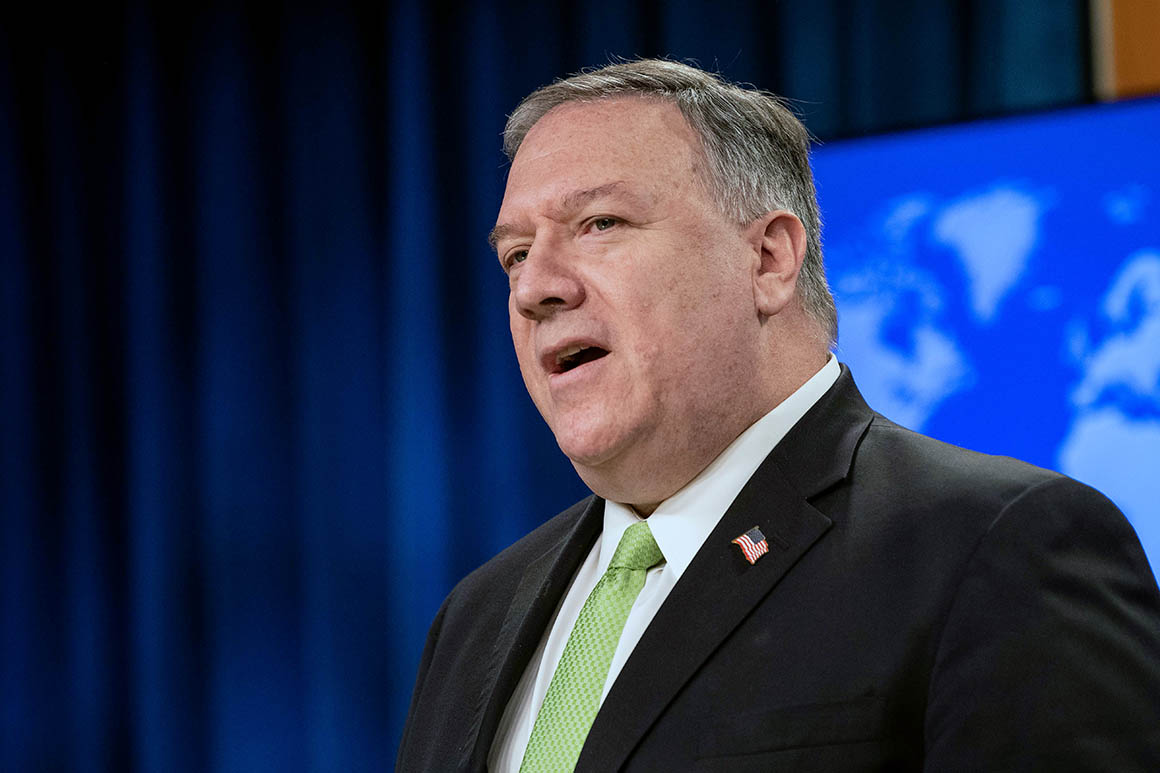 “There is nothing going on right now that we could point to that would say it was any different than the month before,” the former official said.

Further, some of the weapons included in the sale — $8 billion worth of guided missiles for Saudi Arabia and the United Arab Emirates, bombs for Jordan, and other items — would not come online for at least a year.

“Our conclusion was, ‘Nobody supports this being an emergency, so we think that the declaration wouldn’t have any grounds and we shouldn’t do it,’” the ex-official added. Details of the meetings, including a May gathering of the National Security Council Deputies Committee, later made their way to Capitol Hill, reinforcing concerns among lawmakers about the arms sales and prompting legislative action to reverse the transactions.

Pompeo decided to go ahead with the emergency invocation anyway after consulting with then-acting Defense Secretary Patrick Shanahan during an informal breakfast meeting, the former administration official said.

While the Pentagon supported the sale itself, at the time senior officials including Shanahan expressed concern with the decision to invoke emergency authorities given the resistance in Congress, said one defense official. However, looking back, Iran’s activities over the past year since the decision “bore out the fact that there was an emergency,” the official said.

“You look at Iranian behavior over the subsequent 12 months, including attacks on Saudi oil refineries, shooting down a U.S. drone, a ballistic missile attack on U.S. forces in Iraq — it’s clear that a reasonable argument can be made that there was a crisis pending when this sale was approved,” the official said.

Pompeo formally invoked the emergency authority on May 24. The State Department did not respond to a request for comment.

The move infuriated lawmakers from both parties. Current law requires the executive branch to formally notify Congress of an arms sale of this nature; the House and Senate then have 30 days to vote to block the sale.

At the time, it was thought to be highly unlikely that a weapons sale to Riyadh would pass muster in Congress, where lawmakers on both sides of the aisle have become increasingly skeptical of the U.S. relationship with the kingdom. The regime’s killing of Saudi journalist Jamal Khashoggi and its continued participation in Yemen’s bloody civil war have prompted several lawmakers to propose sanctions against the Saudi government, a longtime close but often nettlesome American ally.

The issue was thrust back into the headlines this week when it was revealed that State Department Inspector General Steve Linick, whom President Donald Trump fired last Friday, was investigating the arms sale.

Pompeo reiterated Wednesday that he had asked the president to fire Linick, who was also looking into claims that the secretary and his wife improperly directed political appointees to run personal errands for him, including walking his dog and picking up his dry cleaning.

“I’ve seen the various stories that someone was walking my dog to sell arms to my dry cleaner,” Pompeo said, mocking the allegations. “I mean, it’s all just crazy. It’s all crazy stuff.”

But he did acknowledge that he had responded to written questions about another matter, an apparent reference to the Saudi arms sale.

Congressional sources on both sides of the Capitol said some aides and senators caught wind of the May 2019 meeting shortly after it happened — specifically, that the gathering included mostly career officials who said there was no legitimate basis to declare a national emergency under the Arms Export Control Act.

In the months that followed, several senators who sit on relevant committees had informal conversations with officials who were present at the May meeting, according to a source familiar with the discussions.

Some congressional committees were later briefed on the State Department’s internal deliberations at the time, according to aides, who said it was decided among the group that an emergency declaration was the easiest way to avoid a congressional vote. But through the official channels, lawmakers were in the dark about how exactly the Trump administration came to its decision to invoke emergency powers, including whether a legal analysis had been completed, the aides added.

That led a group of senators to introduce 22 joint resolutions last June to overturn the emergency authorities, led by Sen. Robert Menendez (D-N.J.). The cohort included Sen. Lindsey Graham (R-S.C.), a Trump ally who has soured on the Saudis in recent years. At the time, the senators argued that the administration was deliberately ignoring longstanding precedents on consulting with Congress. All 22 measures ultimately passed both the House and Senate, but Trump vetoed them.

“Now is not the time to do business as usual with Saudi Arabia,” Graham said last year. “I am also very concerned about the precedent these arms sales would set by having the administration go around legitimate concerns of the Congress.”

One former administration official said the decision to declare an emergency in order to sell weapons to the three Middle Eastern states was made at the most senior levels of the administration. And by the time some relevant officials were read in, it was a foregone conclusion.

Rather than hold multiple meetings at the State Department with numerous officials — as is more typical of the process to greenlight arms sales — Pompeo would summon individual subject-matter experts up to his office on the seventh floor for small conversations, per the official. And for months after making the declaration, he received detailed weekly briefings on the status of the weapons systems and the timeline for their delivery.

Trump and Pompeo have maintained their support for Saudi Arabia despite these events. Trump’s first overseas trip as president was to Riyadh, where he met with Saudi Crown Prince Mohammed bin Salman, with whom he has cultivated a close relationship.

Trump stood by his Saudi counterpart and resisted congressional efforts to impose human-rights sanctions even after U.S. intelligence officials briefed lawmakers on their conclusion that the crown prince directed the murder of Khashoggi.

State Department officials were recently briefed about Linick’s conclusions in the probe. Pompeo refused to sit for an in-person interview with the inspector general’s office, News Journos first reported, though he did submit written answers.