Three-quarters of Hungary’s parliament could be occupied by far-right politicians when the National Assembly reconvenes following the country's recent general election. 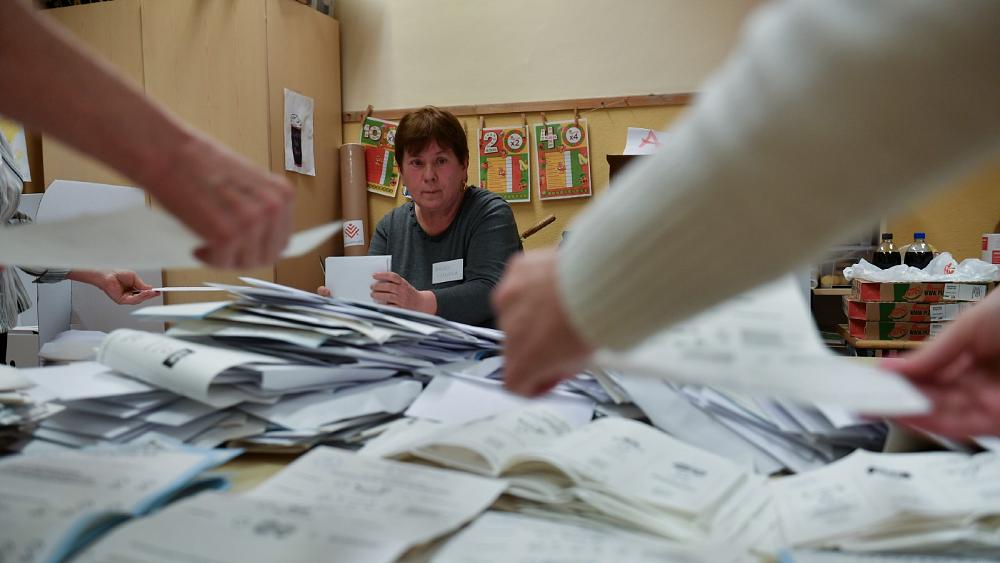 The far-right nationalist Fidesz, the party of the long-ruling prime minister, Viktor Orban, increased its representation in parliament, confounding some pollsters who had expected a neck-and-neck election against an unprecedented six-party opposition alliance.

Fidesz, winning its fourth consecutive election, gained an additional two seats to bring its total share up to 135, enough to also secure a fourth supermajority in parliament in a row.

Fidesz can also count on the support from one delegate of an ethnic-German party as well as the election’s other surprise, the Our Homeland Movement, a far-right nationalist party that likely picked up seven seats in parliament.

That’s just shy of the nine seats won by Jobbik, from which the party had split in 2018.

Will Jobbik swing back to the far-right?

Initially, also a far-right group, which was often described as “neo-nazi”, Jobbik moved to the centre-ground in the mid-2010s as it sought to capture conservative voters put off by Fidesz’s autocratic government.

The more extreme faction of the party, led by László Toroczkai, formerly Jobbik’s vice-president, split to create the Our Homeland Movement in 2018.

Jobbik continued with its centre-right leanings. In December 2020 it agreed to work with five leftists or centrist parties as part of the United for Hungary alliance.

That alliance was expected to centralise the anti-Orban vote at last weekend’s election but failed spectacularly. It won just a third of the vote and 56 seats, six fewer than its composite parties gained at the 2018 election when they competed individually.

Of the 199 seats in Hungary’s parliament, 151 could now be controlled by far-right parties. Fidesz and its satellite party, the Christian Democratic People’s Party (KDNP), will have 135 seats. Our Homeland controls seven.

One big question is whether Jobbik will add its nine seats to the equation if the party swings back to its far-right origins.

Daniel Hegedüs, an analyst at the German Marshall Fund of the United States, said there will be “intense soul searching” within Jobbik since it looks as though a large proportion of its supporters abandoned it for Our Homeland.

“Its existential and ideological crisis is undeniable,” he said. “Apparently the radicalisation of Fidesz hasn’t opened up new opportunities for Jobbik in the centre; it just shifted the whole political stage more rightwards.”

“We will see intense ideological and strategic discussion within Jobbik in the next couple of months, and more defections of politicians and members to Our Homeland cannot be ruled out,” Hegedüs said.

Formally the party was called the Movement for a Better Hungary, though it’s best known as Jobbik, a play on the Hungarian word “jobb”, which means “right”. Hence, it means the “right choice”. It finished in third position at the 2010 and 2014 election.

In its early years, it was known for its controversial positions.

In 2012, the party’s deputy parliamentary leader, Márton Gyöngyösi, called for the government to “tally up” the number of people with Jewish ancestry as they “pose a national security risk to Hungary”.

Aside from repeated accusations of anti-Semitism, party officials were also accused of stirring up hatred against the country’s Roma population and the LGBT community, and it often took controversial opinions on the country’s past rulers, including those who sided with Nazi Germany.

In 2007, Jobbik’s leader, Gábor Vona, helped created the Magyar Gárda, the paramilitary-style wing of the party. A local court banned it two years later, a decision upheld by the European Court of Human Rights.

By the mid-2010s, however, the party leadership cut ties with some of the more extremist elements and announced a lurch to the centre-ground.

Vona, its president since 2006, defended his policy by saying he would resign if Jobbik didn’t win the 2018 parliamentary election. It finished second and Vona resigned, sparking a leadership crisis.

Toroczkai, denied the presidency, left to form the Our Homeland party, leading to more defections from Jobbik. The defeat at last weekend’s election is likely to weaken the party further.

In the party list, Jobbik received almost 1.1 million votes in the 2018 general election, finishing in second place. The five other parties who joined the United For Hungary alliance, who are all centrist or leftist, took a combined 1.6 million votes in 2018.

Yet at Hungary’s election in early April, the entire United For Hungary took just 1.8 million votes.

Political Capital, a local research group, reckons that since most supporters of the five centrist or leftist parties of the alliance wouldn’t have turned coat for Fidesz or Our Homeland, the collapse in the opposition vote must have been because of Jobbik’s supporters switching allegiance.

Andras Bozoki, professor of political science at the Central European University in Vienna, estimates that about a third of Jobbik’s supporters went over to Fidesz and another third to the Our Homeland party.

The third of supporters who remained loyal to the party are in the “pro-democratic Jobbik camp”.

“Perhaps this slim democratic Jobbik will be a working-class party in the future,” Bozoki said. “But currently, we can see that the decline of Jobbik contributed to the defeat of the united opposition.”

Katherine Ann Kondor, a postdoctoral fellow at the University of Oslo’s Center for Research on Extremism, reckons Jobbik will maintain the more moderate image they’ve created. After all, she said, a swing back towards right-wing extremism is improbable as the Our Homeland party now fills that space.

Yet she downplays whether the moderation of the party leadership is as genuine as some believe: “The people in the party still seem to have the same views as four years ago, a wolf in sheep’s clothing if you will.”

Another question is whether Jobbik wants to remain part of the United for Hungary alliance when politicians take up their seats in parliament.

Márki-Zay, a non-aligned mayor from Hódmezővásárhely, won the extensive primaries held last year to select a single candidate for the opposition coalition.

Jakab didn’t attend Márki-Zay’s concession speech on election night, and the following day lambasted the sole candidate for not being up to scratch to lead the alliance to victory.

However, he stated that Jobbik remains committed to cooperating with its opposition allies.“We will also get back the right-wing and left-wing voters” who were put off by Márki-Zay, he wrote on his Facebook page last Monday.

For Jobbik, the election result couldn’t have been worse, as it was the whole democratic opposition.

Aside from Jobbik, the biggest loser appears to be the Hungarian Socialist Party (MSZP), which won 15 seats at the 2018 election but will now likely have just eight, and the Green Party (LMP), which previously held eight seats but will now command just four.

Yet the socially-liberal Democratic Coalition (DK) will control 17 seats, up from nine at the 2018 ballot. The Dialogue for Hungary (PM), another green party that split from the LMP in 2013, has gone from five seats to seven.

Perhaps the biggest winner of the opposition alliance was the new centrist Momentum Movement, which will enter parliament for the first time with nine seats.

Centrist or leftist parties now control 47 of parliament’s 199 seats, compared to 37 after the 2018 ballot.