He then followed up with another message mentioning the official Twitter accounts for acting White House budget director Russ Vought, White House chief of staff Mark Meadows and the Treasury Department. Hours later, the president deleted his original tweet and re-sent a similar tweet that said "absentee ballot applications" without noting his original mistake. 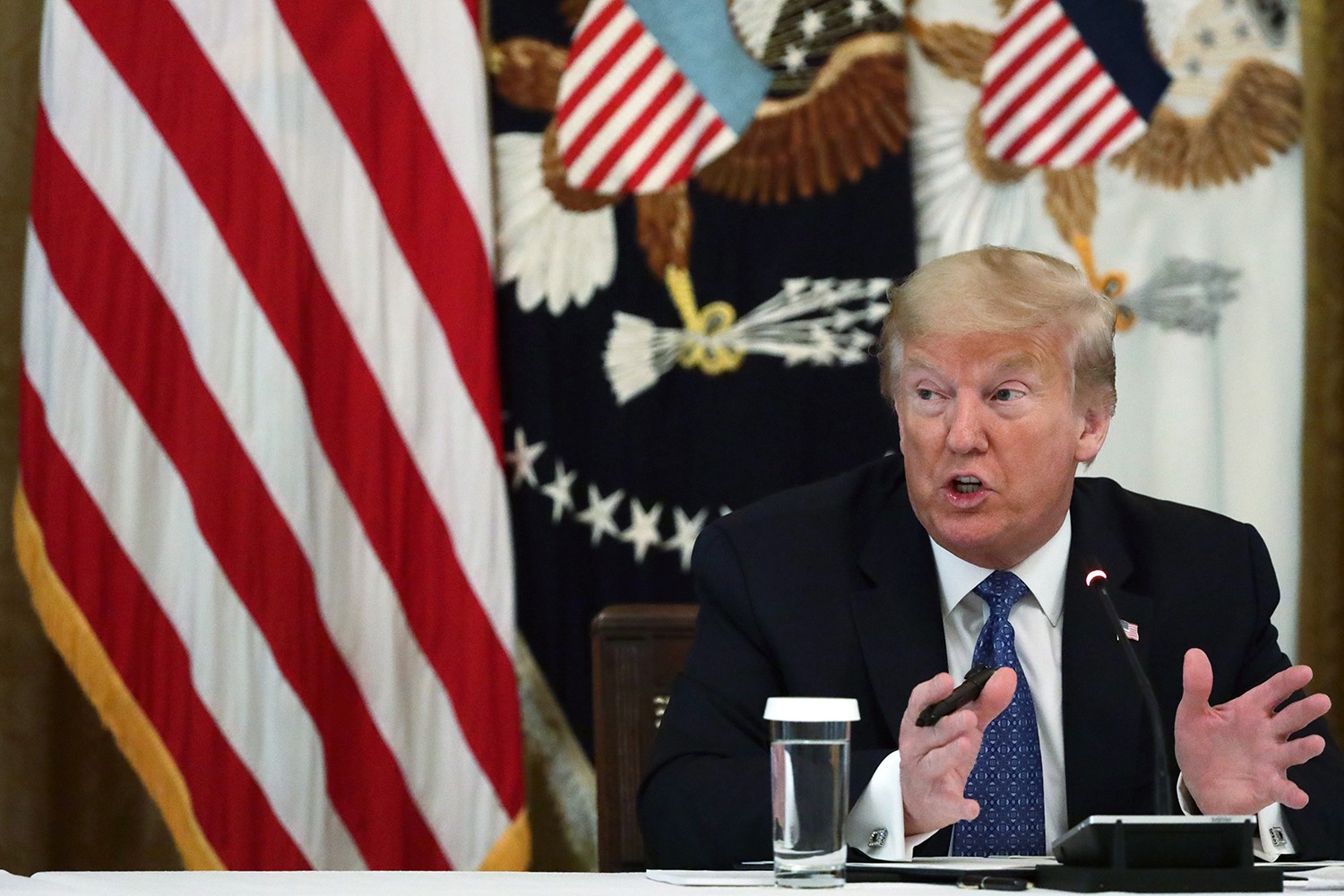 The president’s tweets inaccurately described a recent policy change in Michigan, where Secretary of State Jocelyn Benson, a Democrat, announced Tuesday that all of the state’s registered voters would be mailed absentee ballot applications for the August down-ballot primaries and November general election — not a ballot directly.

Responding to the president, the secretary tweeted that “I also have a name, it’s Jocelyn Benson,” and noted her office was sending applications “like my GOP colleagues in Iowa, Georgia, Nebraska and West Virginia.”

It is unclear who the president thinks needs to authorize Michigan’s decision; Republicans in Congress for years have resisted efforts to inject federal oversight into state and local elections.

A spokesperson for Michigan Gov. Gretchen Whitmer, a Democrat, did not immediately respond to a request for comment on Trump’s tweet.

In a press briefing at the White House on Wednesday afternoon, press secretary Kayleigh McEnany repeatedly declined to answer questions about what specifically Trump believed was illegal about Michigan’s efforts. Instead she reiterated Trump‘s unfounded claims, saying he was concerned about “a lot of fraud that is potentially at play when you have mass mail-in voting.“

McEnany wouldn’t say what funding Trump was considering withholding, telling reporters that the tweets were merely “meant to alert Secretary Mnuchin and Mr. Vought, head of OMB, about his concerns with trillions of dollars going to these states” given his concerns about mail-in voting.

“This is a concern, the president’s right to look at this, we want a free and fair election and that’s his concern,” she said.

Moments after the briefing, during a meeting with the governors of Arkansas and Kansas, Trump appeared to slightly walk back his threat to Michigan.

Asked by reporters which funding he wanted to freeze, Trump said only that he had “very specific funding in mind“ and pledged to keep the media apprised of whether a hold on funding would ultimately be necessary.

“I don’t think it‘s going to be necessary,“ he added.

McEnany also sidestepped questions about why the president was singling out only certain states, charging that because they pertained to ballots, the issue fell under the purview of Trump’s reelection campaign rather than the White House.

The president similarly threatened Nevada later Wednesday morning, tweeting: “State of Nevada ‘thinks’ that they can send out illegal vote by mail ballots, creating a great Voter Fraud scenario for the State and the U.S. They can’t! If they do, ‘I think’ I can hold up funds to the State. Sorry, but you must not cheat in elections.”

Nevada is sending ballots to all active voters in the state ahead of its June down-ballot primary. Following a lawsuit backed by national Democrats, election officials in Clark County, the state’s most populous county, would also mail ballots to voters listed as inactive, along with a slew of other changes.

Nevada Secretary of State Barbara Cegavske, a Republican, previously announced in March that the state’s primary would be conducted predominantly by mail, and county election officials began sending absentee ballots to all active registered voters earlier this month.

Election officials in both parties from states across the country have scrambled to hold elections in the middle of a pandemic. Georgia Secretary of State Brad Raffensperger, a Republican, recently touted the fact that 1 million people had requested absentee ballots ahead of his state’s early June primary, after he made a similar decision to send ballot request forms to voters.

“For a state that previously had only around 40,000 mail ballots voted in past general primary elections, the surge to one million ballots sent out is a monumental accomplishment on its own,” Raffensperger said in a statement earlier this month.

It is unclear what federal funding the president would seek to block, or if he even has the authority to do so. Both Michigan and Nevada have requested emergency funding from the Election Assistance Commission to prepare officials for holding an election during a pandemic.

The CARES Act, a coronavirus relief package passed by Congress in March, included $400 million in funding for election security, but House Democrats are seeking drastically more money for election officials.

“We as Republicans have a distinct, different philosophy on what the federal government’s role in elections should be. We believe that the states and localities are the best ones to get their voters to the polls and recognize what’s going to give everybody an opportunity to cast a vote,” Rep. Rodney Davis (R-Ill.), the ranking member of the House rules committee, told News Journos last week.

Although numerous states have delayed their primary contests as a result of the ongoing public health crisis, Wisconsin controversially proceeded with its election on April 7 after the state Supreme Court blocked a last-minute executive order by Gov. Tony Evers, a Democrat, postponing in-person voting.

Still, Trump has fought fiercely in recent weeks against efforts to expand mail-in voting, suggesting that such a shift in ballot-casting practices would yield unfavorable electoral results for the Republican Party and result in widespread corruption at the polls. A recent study found that to be untrue — on the whole, voting by mail does not benefit one party over another.

In fact, Republican political operatives have embraced vote-by-mail. The GOP last week flipped a House seat in California for the first time in decades in a predominantly mail-in election, while Republicans’ superiority in getting their voters to return mail-in ballots in Florida has consistently given them the edge in close elections in the state.

Cases of election fraud in the United States are exceedingly rare, although certain experts acknowledge there are some slightly higher risks with mail-in balloting when proper security measures are not implemented. The most prominent, recent example came in 2019, when an election for a North Carolina House seat was tossed out after a Republican operative illegally collected ballots.

Trump on Wednesday afternoon pointed to the California election, claiming the scenario was “sort of the opposite“ of his criticisms, though he continued to rail against mail-in ballots in his meeting with the two governors, calling the practice “dangerous“ and subject to “tremendous illegality.“

“I just think common sense would tell you that massive manipulation can take place,“ he argued, rattling off a list of examples of how fraud could take place but providing no evidence of many of the scenarios he mentioned ever having taken place. And while he raised the issue of ballot harvesting, he didn’t mention the North Carolina case carried out by an operative of his own party.