Turkey’s President Recep Tayyip Erdoğan underwent surgery to remove a cancerous tumor and suffers from epilepsy, among other possible health complications, which may explain his sometimes erratic behavior, angry outbursts and conflicting remarks that puzzle many outside observers, a News Journos investigation has found.

Just like the cloud obscuring how his government spends taxpayers’ money and enacts laws that deal blows to transparency in governance in Turkey, President Erdoğan is also not forthcoming in revealing details about the status of his health, fueling all sorts of speculation. The president’s aides often portray him as perfectly healthy and downplay any health issue that have caught public attention. Nevertheless, there is enough evidence to confirm that the Turkish president has suffered or still experiences multiple health problems.

What is known for a fact is that he survived colon cancer and underwent surgery on November 26, 2011 in Istanbul when he was 57 years old. According to sources who have inside knowledge of Erdoğan’s health, the cancer was discovered during an examination of Erdoğan, who was complaining of digestive problems and blood in his stool. The sources were interviewed on condition of anonymity for fear of threats to their lives by the Erdoğan government, which has dismissed and/or imprisoned over 20,000 health care professionals including doctors and nurses since 2016.

His doctors performed both a colonoscopy and sigmoidoscopy by sampling areas of the colon suspected of possible tumor development. The microscopical examination of a tissue sample indicated that he had tumor known as a villous adenoma, which means he had an advanced form of adenoma and a precursor to cancer. 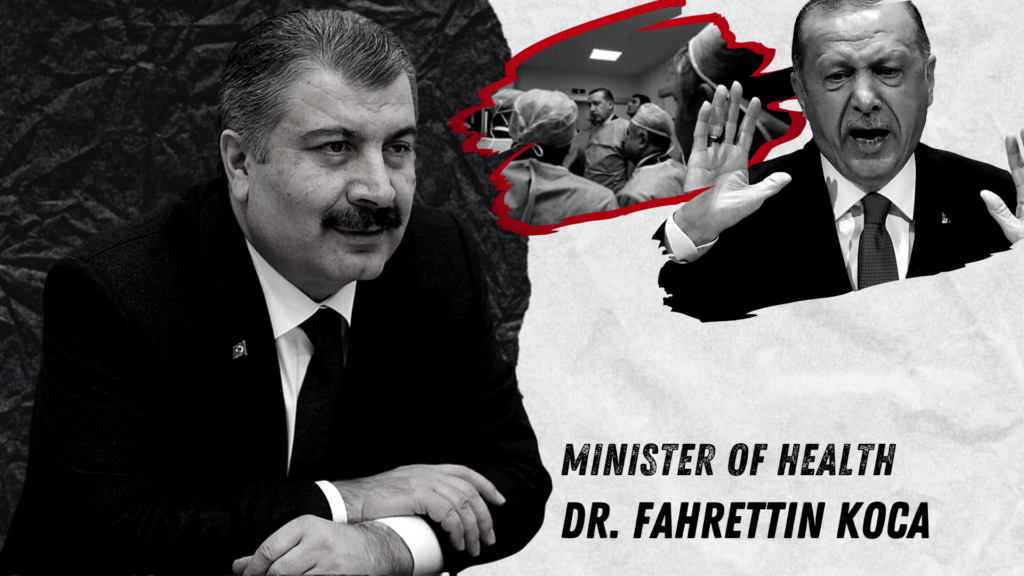 Having made a determination that surgery was required, Erdoğan’s doctors started asking who the best surgeon to perform such an operation was. The name of Professor Dursun Buğra, a well-known surgeon, came up during the consultations, which were discreetly led by Dr. Fahrettin Koca, who later became the health minister in the Turkish cabinet. Koca was at the time in charge of running the Erdoğan family’s secret investments in the health and medical industries including the Medipol hospital.

Secrecy was paramount as any revelation of Erdoğan’s declining health could encourage his opponents, who would start raising questions as to whether he was fit to occupy the country’s highest executive office. Some suggested that Buğra was known as a man who kept things to himself and would be less likely to divulge any information about the health of his patient. In the end the surgery was performed at Marmara University Hospital by a team of surgeons and specialists led by Buğra and his assistant, Dr. Emre Balık. Some 20 to 25 centimeter of Erdoğan’s colon were removed during the procedure.

The only official public statement about the surgery came two days later, with the prime minister’s office stating that Erdoğan underwent a successful surgery for a digestive problem and would soon resume work after a rest. It did not mention any cancer or tumor. Then-Health Minister Recep Akdağ, who is now lawmaker in Erdoğan’s party, said there was nothing wrong with Erdoğan’s health but that doctors had simply recommended that he rest.

he only public comment made by the medical team that performed the procedure came from Professor Mehmet Füzün, also a specialist in colorectal cancer and then president of 9 Eylül University. He was only present during thesurgery as an expert and did not participate in the operation. “The intestinal polyps we removed during the 3-hour-long operation were big but not malignant,” he said.

It is not clear to what extent Füzün’s remarks reflect reality, given the fact that he had been tried on charges that he wrote a false health report for 81-year-old Meliha Öktem, a close relative and psychiatric patient, in order to change her will and inherit all her wealth and assets. The will emerged after Öktem’s death on April 25, 2007, surprising 16 other relatives who were the legal heirs. At the end of the trial, the will was voided, and the inheritance was shared according to the ratio prescribed by law. He also faced criminal charges of document forgery and abuse of authority by the prosecutor in the town of Urla.

Füzün was appointed by the government as president of the university despite the fact that his rival, Professor Sedef Gidener, received the most votes from academic staff and that Füzün came in third. According to him, Erdoğan was “among the top three or five leaders in the world.” Therefore, his remarks on Erdoğan’s health should be taken with a grain of salt.

Erdoğan was discharged from the hospital on November 30. The first photographs released by Erdoğan’s office after the surgery showed him smiling and meeting with Joe Biden, the then-US vice president, at his home in the Üsküdar district of Istanbul on December 3, 2011. Biden was in Turkey to attend the Entrepreneurship Summit. The second picture was with then-Qatari ruler Sheikh Hamad bin Khalifa al-Thani. Al-Thani and Erdoğan met at Erdoğan’s home in İstanbul for one-and-a-half hours on December 7, 2011.

During the surgery, doctors also performed an ileostomy onto Erdoğan’s skin to collect the stool that was diverted into a bag to keep stool away from the recently operated-on area while healing occurred. Erdoğan had to live with a temporary pouch for two-and-a-half months until he had the second operation on February 11, 2012. The reverse ileostomy took some 30 minutes and was conducted by the same surgeon, Dr. Buğra, at the Medipol Hospital.

According to the World Health Organization (WHO) Cancer Country Profile 2020 data, Turkey had 210,537 cancer cases in 2018, the last year reported. Of this, 9.5 percent consisted of colorectal cases, with a mortality rate of 3.6 percent. The occurrence of colorectal cancer in Turkey is more than double the global average of 4.4 percent, the WHO data revealed. The most common type of cancer in Turkey is lung cancer, which accounted for 16.5 percent of cases in 2018, with a mortality rate of 28.9 percent.

A specialist and surgeon who was involved in the consultations before the surgery told News Journos that Erdoğan went through chemotherapy afterwards but not radiology treatment, which allowed the president to function as normally as possible. “The people who are operated on for this type of cancer can survive as a healthy person for up to 20 years,” he said, speaking on condition of anonymity due to concerns for his safety.

Despite health troubles in the past, President Recep Tayyip Erdoğan appears to have been functioning well and seemed healthy enough to give several public speeches on a single day on some occasions. However, there have been several instances where he was seen dozing off during live press events with his counterparts and losing his balance while walking, to the extent that he nearly fell over. Specialists who observed Erdoğan say such events may very well have been related to the workload on the president, who was simply tired and did not get enough sleep.

Erdoğan also suffers from epilepsy, a disorder of the central nervous system that specifically impacts the brain. He had shown symptoms such as seizures. On October 17, 2006 he was on his way to parliament when a seizure struck, and his bodyguards, who had accidentally locked him in the car in the panic, had to destroy the windows with a sledgehammer to get him out. He was taken to the nearby Güven Hospital for emergency treatment. His office claimed Erdoğan’s blood pressure was low as he was fasting and that his health was good.

In the hospital, Erdoğan was immediately taken to the radiology department where a brain CT scan was performed to identify any issue with the brain that may have caused Erdoğan to temporarily lose consciousness. He was stabilized, and his vitals went back to normal. No confirmation of epilepsy was made by either the hospital or his office. It was claimed that neurology specialist Dr. Fethiye Sümer Güllap, the first doctor who treated Erdoğan when he was rushed to the emergency room, made a determination that Erdoğan had suffered an epilepsy attack. However, her report went missing in the hospital records, and she passed away at the young age of 42 under what some described as suspicious circumstances.

Journalist Serdar Özsoy, who took the first pictures when Erdoğan was having the seizure in the car, was detained by bodyguards at the request of Erdoğan’s spokesperson, Akif Beki, who seized the journalist’s camera and pictures. Erdoğan’s team spared no effort in making sure he was portrayed as a man in good health and prevented the facts from coming out in media coverage. Beki made flurry of calls to media owners to kill any story or picture that would damage Erdoğan’s image as a healthy man.

The claims of epilepsy were also raised by government insider Fuat Avni on Twitter in May 2016. Avni, whose whistleblowing revelations proved true in many instances, said Erdoğan’s seizures had increased and that his doctors were concerned that he might experience a seizure while speaking in public.

The specialists News Journos consulted said the seizure at the time was most likely caused by a medication that was not properly adjusted for Erdoğan or that he skipped taking the pills. As long as he keeps taking drugs in the proper dosage, he should be fine, they added.

President’s Erdoğan’s public outbursts, outrage and quick mood changes at press events when a tough question is asked might be explained by his condition. After all, the possible side effects of epilepsy drugs include mood swings, irritability, agitation or depression. Perhaps this partially explains Erdoğan’s quick turnaround on his publicly recorded remarks, denying what he said earlier. Although politicians in Turkey often lie, Erdoğan breaks the record and contradicts himself within a few hours after his initial statements to the public.

When added to constant stress and the lack of sleep that comes with the job, Erdoğan’s epilepsy problem may be getting worse, confirming whistleblower Avni’s revelations. The president’s tendency to be suspicious and have difficulty trusting the people around him may aggravate the condition as well.

It is also worth noting an interesting claim made by Turhan Çömez, a medical doctor and former ally of Erdoğan who was indicted on criminal charges in Turkey in 2008. Appearing on TV in December 2014, Çömez said he was advising Erdoğan on his health when he was working with him.

“I participated in the surgeries that Erdoğan underwent. I even kept the anesthesia equipment in my home the day before the surgery in case somebody wanted to harm him [by tampering with the equipment],” he said.

He also added that he once took Erdoğan abroad for treatment. He declined to provide details on why Erdoğan was treated overseas or for what. Çömez fled Turkey and remained a fugitive for years in the UK before the charges against him were dropped. He still lives in the UK.

Capturing value in crypto through network effects and mechanism design

Is Wayfair Involved In Online Child Trafficking! Is Amazon…

5 Major Cases That Proofs There Is No Freedom of Expression…

‘I cannot breathe!’: FBI investigates death of a black man…