In a week that uncovered the extent of Russian atrocities against Ukrainian civilians, an indiscriminate attack on a train station Friday appeared to provide the strongest indication yet that President Vladimir Putin remains undeterred in his offensive, even as he faces the prospect of war crime charges. 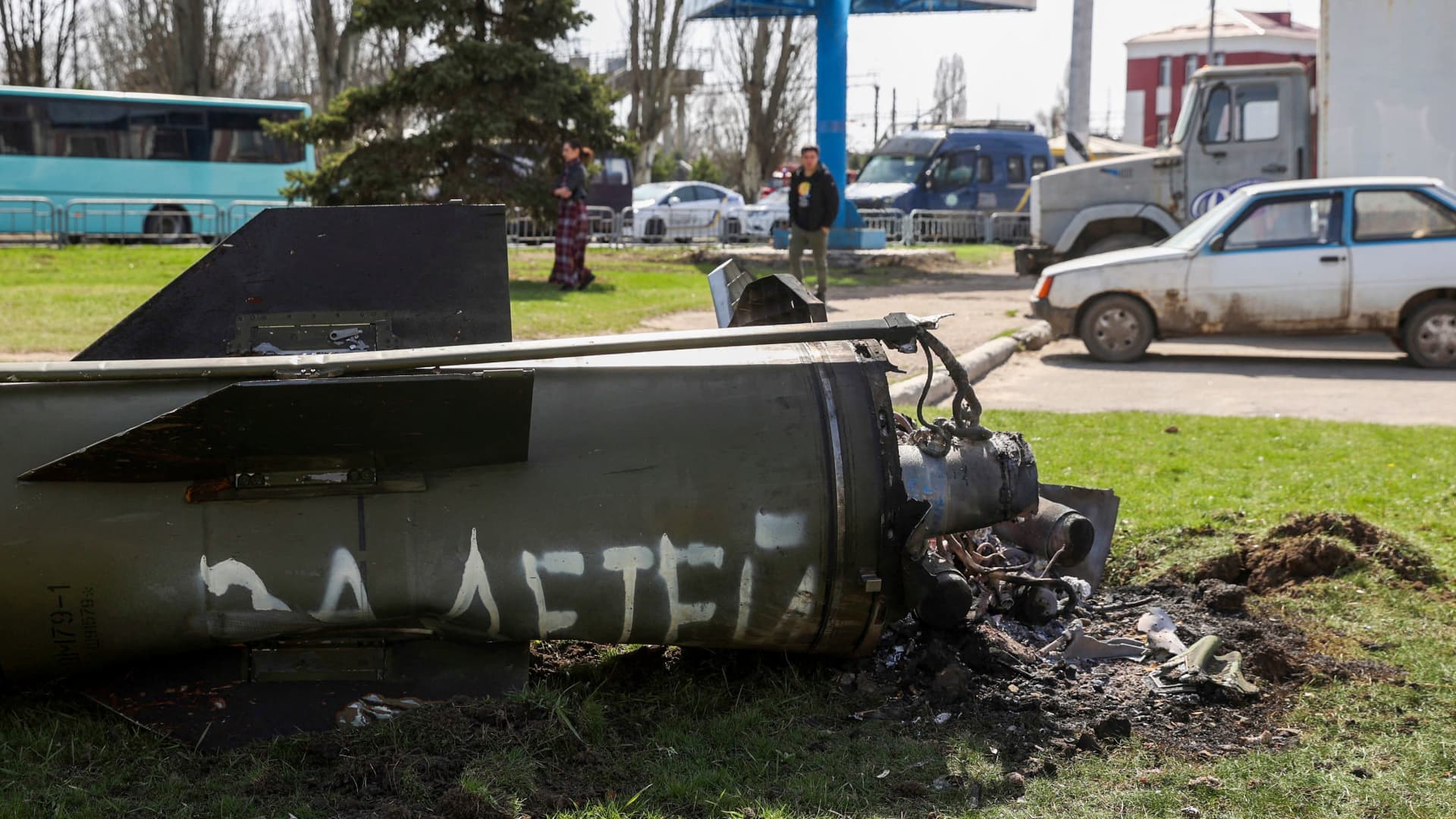 Two rockets hit a railway station in Kramatorsk, eastern Ukraine, killing at least 50 people and injuring almost 100 as families and individuals waited to evacuate to safer parts of the country. Ukraine has demanded that Russia be punished for the shelling — and all crimes on their territory.

The remains of a Russian rocket, one of two to be launched at a railway station in Kramatorsk, eastern Ukraine, killing 30 and injuring 100 more.

The Kremlin has denied it was responsible for the Kramatorsk station attack.

It comes as hundreds of devastating images and more local accounts of mass killings and torture of civilians came to light this week, chiefly from the cities of Bucha, Irpin and Hostomel, just outside Kyiv.

In Bucha alone, satellite images of crowded graves appear to corroborate claims by the mayor that more than 300 people have been deliberately killed in the city by Russian soldiers. On the streets there, some bodies were found with their hands tied behind their backs, suggesting they were executed. Others appear to have been killed while trying to flee via humanitarian corridors.

The Kremlin has also denied any involvement in these attacks, despite well-documented evidence to the contrary.

A dead body lays strewn on the ground next to a bicycle on the outskirts of Bucha, Ukraine. Scores of civilians are thought to have been killed by Russian troops while trying to flee the city to the northwest of Kyiv.

Western allies and human rights groups have rallied to denounce the indiscriminate civilian attacks. G-7 foreign ministers on Thursday responded to the news from Bucha and elsewhere saying they “welcome and support” efforts to investigate potential war crimes and crimes against humanity perpetrated by Russian forces.

“The massacres in the town of Bucha and other Ukrainian towns will be inscribed in the list of atrocities and severe violations of international law, including international humanitarian law and human rights, committed by the aggressor on Ukrainian soil,” they said in a joint statement.

But not everyone is convinced that such measures will be enough to deter the Kremlin from its onslaught.

“It is difficult to know whether the threat of accountability weighs at all on the minds of the Russian military or political leadership, including Putin,” Shelley Inglis, executive director of the University of Dayton’s Human Rights Center, said.

Ukraine’s President Volodymyr Zelenskyy has said the Kremlin-led attacks amounted to genocide and called for those responsible to face war crime charges in front of a tribunal — like the one established in Nuremberg, Germany after World War II.

Putin, meanwhile, continues to deny that Russian forces are targeting civilians — despite evidence suggesting otherwise — espousing an alternate reality of Ukraine as the aggressor and insisting that Kyiv has fabricated evidence of war crimes. That even as satellite footage of the corpse-strewn streets of Bucha dating back to mid-March — when the city was under Russian occupation — counter Moscow’s claims.

Images and local accounts of the mass killing, torture and rape of non-combatants in the cities of Bucha, Irpin and Hostomel, just outside Kyiv, have heightened calls for Russia perpetrators to be tried for war crimes.

In the meantime, investigations into alleged war crimes continue under the leadership of the International Criminal Court backed by Western allies.

Evidence gathering for such crimes is a lengthy and complex process with no guarantee that Putin or other perpetrators would be prosecuted in the end. Historically, few heads of state have ever been held accountable for war crimes or crimes against humanity, and none while in power. As such, the threat of war crime investigations may not be a sufficient deterrent for the Kremlin.

International condemnation or war crimes threats will have little effect on Russian behavior. This is nothing new for them.

The University of Dayton’s Inglis said such trials could “raise the stakes politically” for the Western alliance and further undermine Russia’s position on the world stage, making it “more difficult to imagine a path by which Russians and Putin can negotiate their way out.”

Yet others are less optimistic that recent events, however brutal, will bring a conclusion to the war.

Civilians walk amid the destruction on a street in the town of Bucha, on the outskirts of Kyiv, after the Ukrainian army secured the area following the withdrawal of the Russian army.

“International condemnation or war crimes threats will have little effect on Russian behavior. This is nothing new for them,” said Bob Latiff, a chairman at the University of Notre Dame, citing previous offenses in Syria and Chechnya.

“As others, I am afraid there will be no end of the war any time soon,” added Thomas Kuehne, professor at Clark University.

“The history of warfare and war crimes over the last 100+ years shows consistently that war crimes like those we see now are perpetrated purposefully and in full awareness of the shock they evoke. And we are shocked, but sadly, we are also used to witnessing such crimes and their consequences,” he said.

The influence of India and China

Still, there is another source of international action that could prove more powerful in influencing Putin’s resolve, according to analysts. That is increased pressure from India and China.

“The crimes are increasing resolve among Ukraine’s existing supporters to continue and even step-up military assistance and economic pressure. But ending the war will require a bigger coalition of support — reaching China, India, and others,” Mary Ellen O’Connell, professor of law at the University of Notre Dame, said.

If China were to shift its stance on the war it would likely be a game changer for Putin.

India, without naming Russia, said this week that it “unequivocally condemned” the mass killings in Bucha and supported calls for an independent investigation, breaking from its previous neutrality. On Thursday, it abstained from a vote, backed by two-thirds of countries, to suspend Russia from the U.N.’s Human Rights Council.

However, China — a key strategic ally of Russia’s which has toed the Kremlin’s line on the war — continues to resist condemnation of the killings in Bucha and indeed voted against Russia’s suspension from the human rights body.

Without a shift in tone from the world’s second-largest economy, Putin is unlikely to be moved, Inglis said.

“If China were to shift its stance on the war it would likely be a game-changer for Putin. But today, China moved away from historically abstaining in votes on resolutions at the UN related to the war, to voting against the resolution,” she said.