“Listen, the American voters remember Biden as the happy grandfather during the Obama presidency,” said a former Trump 2016 campaign official. “The more you can do to imprint a damaging impression of Biden heading into the fall, the better off the Trump campaign will be.” 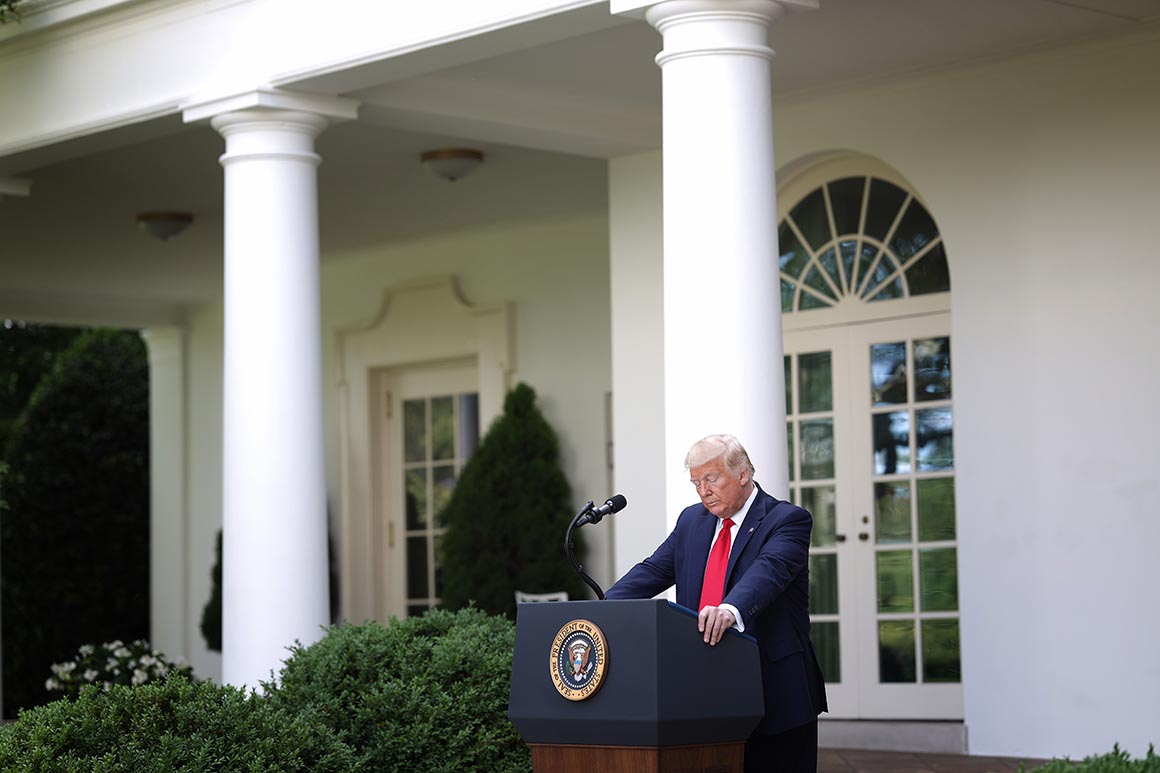 A Trump campaign official defended the approach so far, saying the campaign has spent millions of dollars on digital and TV ads in recent weeks to hit Biden on his approach on China, energy, foreign policy, taxes and his economic record.

“It’s pretty clear how the campaign is messaging around Joe Biden: That he is an old school D.C. insider with bad policies who is a bad candidate to boot,” the official said. “You see it day after day.”

Biden has mostly stayed out of public view, apart from the occasional TV hits from his house with its backdrop of white bookshelves. He spurred a wave of controversy late last week when he said during a radio interview that African Americans who could not decide whether to support himself or Trump “ain’t black,” a gaffe that rankled huge swaths of the Democratic base. Biden apologized hours later amid the furor.

When Biden did emerge from his house on Monday to lay a wreath on Memorial Day, he did not offer prepared remarks. The main takeaway from his appearance was photographs of him wearing a black face mask in public, as the Centers for Disease Control and Prevention recommends when social distancing is not possible — a move Trump has refused to do publicly in White House meetings or events, or in visits outside of Washington.

Many Trump supporters and Republicans argue time is running out to settle on the most damaging messages attacking Biden before the conventions. Several insiders wish the campaign took him on more aggressively this spring, while the president handled the coronavirus response and took advantage of the optics of the White House to portray himself as a leader in a time of crisis.

The Trump campaign is taking steps to reorient its strategy heading into the summer. On Tuesday, the campaign elevated one of its top staffers, Bill Stepien, to deputy campaign manager — a move Trump aides and allies saw as necessary to promote greater political savviness and prior campaign experience within the ranks of the Trump 2020 team.

One senior administration official said Trump and his son-in-law, Jared Kushner, began to sense that his campaign lacked a strategy for ensuring his political survival in the midst of a global pandemic. Over time, the absence of experienced pollsters and veteran strategists inside the campaign grew more apparent to Kushner, who was the first to float the idea to Trump of moving Stepien higher within the campaign apparatus, the official said.

Your guide to the permanent campaign — weekday mornings, in your inbox.

A handful of Trump veterans have defended the campaign so far by saying that launching several lines of attack on Biden during a pandemic would not have made much sense.

“The easiest thing to do is to criticize a broad and general direction, whether it be the campaign or the White House,” said Jason Miller, a senior communications adviser to the 2016 Trump campaign. “The campaign is being smart because voters are not paying attention to politics right now.”

Another Trump political adviser argued any polling that shows Trump behind in swing states or even nationally may end up being off by a few percentage points or wrong, just as polling was incorrect in the 2016 when Trump ultimately won the presidency.

Trump’s approval rating in mid-May was among the highest it’s ever been, according to Gallup polling. If the economy bounces back, Trump aides and advisers believe this will leave him in a good position to argue that he helped to resurrect it.

The Trump campaign originally intended to lean heavily on an economic message for the reelection, highlighting the low unemployment rate, booming stock market and high labor force participation. The coronavirus upended that calculus, forcing the campaign to rejigger its strategy in real time.

Calling Biden “Sleepy Joe” will not work forever, allies and Trump aides argue, especially once voters start to tune into the election more over the summer and the fall. Biden also may be tougher to define than Romney was eight years ago, because the former vice president has been on the national political stage for decades where voters already formed opinions of him.

“They have not coalesced around the best message to attack Biden, and the message that Biden is diminished doesn’t scare people enough,” said a second Republican close to the White House. “A lot of Americans just don’t want the government to screw things up.”